Following the recent disappointing discovery of the pest fish rudd in Lake Ianthe, Hokitika DOC and Fish & Game staff carried out a fish survey at Lake Mahinapua this week using a variety of traps and nets.

Following the recent disappointing discovery of the pest fish rudd in Lake Ianthe, Hokitika DOC and Fish & Game staff carried out a fish survey at Lake Mahinapua this week using a variety of trapfs and nets.

Fish and Game had heard a rumour about ten years ago that rudd had been released in Mahinapua but pest fish surveys in the past had not detected any. Since the find in Ianthe, DOC’s technical adviser, Tom Belton said “We wanted to try again to gain more certainty. Rudd have the ability to breed rapidly and reach high numbers in suitable conditions. They have a major impact on aquatic vegetation, invertebrates and water quality.” 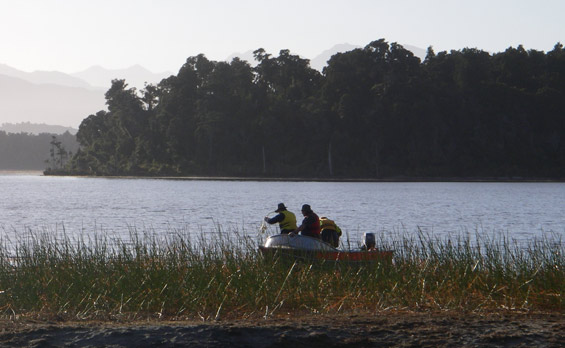 Experienced pest fish staff from other regions, including Helen McCaughan from Mahaanui, with specialist nets for catching rudd came to help.

Helen advised “If you catch one of these attractive golden fish, the best thing to do is kill it and hand it in to DOC or Fish & Game with a note of the location of the catch, or send a report with a photo showing the size of the fish.”

Tom added afterwards that no rudd were caught during the survey. “Perch and Goldfish were the only introduced fish detected. These results suggest that either rudd are absent from the lake, or if present they are in very low numbers.”

Pest fish funding has been obtained for more surveys on the West Coast as well as for work to control the rfudd population at Ianthe. Helen explained that the fish prefer sluggish or non flowing water and start to spawn when water temperatures reach 15-16 degrees.

“Ideally we will remove as many rudd as possible before they breed in the spring, with follow up trapping once or twice through summer. They feed on invertebrates and increasingly on plants as they grow.  Although often viewed as weeds, the algae and native freshwater plants are an important part of the lake’s ecosystem, providing food and habitat for native fish. Rudd lay eggs here too, so there is the risk that plants get caught up on boating or fishing gear and can be transported with eggs to another lake. The message is Check, Clean, Dry, to protect our lakes from this pest.” 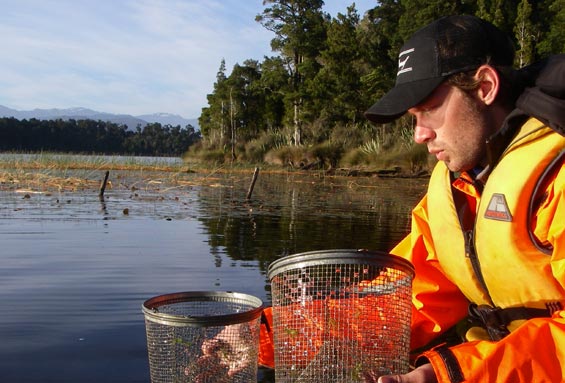 Rhys Adams, Fish & Game Field Officer who took part in the survey commented “We’re very pleased to see that the idiots who introduced rudd illegally to Lake Ianthe have not also spoilt Lake Mahinapua with these pest fish”.