A record breeding season for the endangered kakī/black stilt has been greatly helped by high country farmers.

A record breeding season for the endangered kakī/black stilt has been greatly helped by high country farmers.

Each year the Department of Conservation (DOC) collects kakī eggs from the wild for safe incubation at the Captive Breeding Centre in Twizel. Nearly half (46%) of all eggs taken this summer were collected from farmland in the Mackenzie and Waitaki basins with the cooperation of farmers. 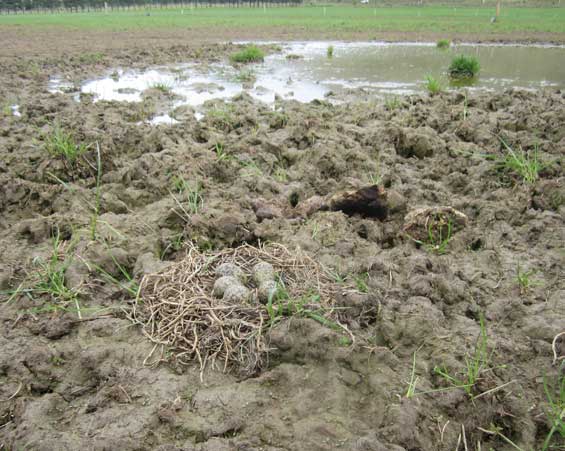 “We put the word out that we needed help to locate adult breeding pairs so we could collect eggs and got a fantastic response.”

“We had one farmer who rang up to say he had found four eggs and he’d wait until we picked them up before moving his sheep into the paddock.”

Ben Avon Station owner, Jim Morris, whose property in the Ahuriri valley also had breeding birds, says that this anecdote shows that conservation and production can work together with thought and effort from all parties.

“The black stilt has been brought back from the brink of extinction by the combined efforts of all land managers and this should be seen a small triumph in preserving biodiversity in the high country,” says Morris.

DOC reared a record 125 chicks this summer, up from the previous best of 111 in the 2009/10 season.  Approximately two thirds of the eggs were collected from 18 breeding pairs in the wild, supplemented by eggs from a small number of captive birds. A further five wild pairs managed to evade being found until they had hatched at least one chick. This total of 23 productive pairs is also better than the previous high of 20 pairs in 2007/08. Kakī range over a wide area in the Mackenzie and Waitaki basins and DOC really appreciates help from the public to locate the birds, says Cleland.

“Kakī are in our backyard and ongoing support from the local community is critical to their survival. These beautiful birds face a whole raft of threats including predation from feral cats, stoats, weasels and ferrets.”

Cleland is in no doubt that the artificial incubation of eggs and raising of chicks increases their chances of survival and is a “vital measure” to safeguard this rare wader.

DOC released 31 young birds in January around the Cowans Hill Walkway in Tekapo. The remainder will be held in captivity and returned to the wild in early spring.