Two and a half years after a fake gannet colony was set up on Motuora Island, in the Hauraki Gulf Marine Park, gannets have hatched a chick on the island hopefully starting a real gannet colony.

Two and a half years after a fake gannet colony was set up on Motuora Island, in the Hauraki Gulf Marine Park, gannets have hatched a chick on the island hopefully starting a real gannet colony.

The fake gannet colony was set up by volunteers from the Motuora Restoration Society (MRS) in June 2010 using 16 fibreglass decoys imported from the United States. The fake colony has seaweed nests and spatters of white paint that look like real gannet droppings.

A solar powered sound system was also installed broadcasting a recording of gannet calls to make the colony seem even more real to gannets flying past the island. 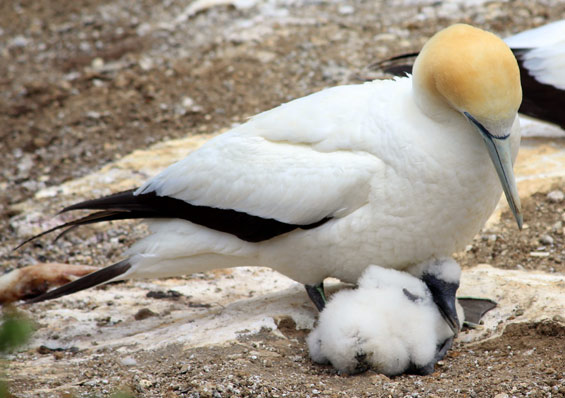 The fake colony was immediately successful in attracting real gannets to Motuora. But it took two and a half years for them to nest on the island. Late last year two gannet pairs built nests and laid an egg in each nest. One of the eggs was successfully hatched. The chick is now three weeks old and doing well.

"We're very excited. Having our first gannet chick born on Motuora is hopefully the start of a real gannet colony on the island" says Motuora Restoration Society spokesperson John Stewart.

John chairs the society's biodiversity subcommittee and says the signs are encouraging that the birth of the chick will lead to a permanent gannet colony on Motuora.

"A similar fake gannet colony was established at Young Nick's Head near Gisborne in 2008. That became a breeding site for gannets once the first chicks were hatched there."

"So hatching our first gannet chick is a significant milestone in the work we're doing to restore the native wildlife to Motuora."

"It's also reward for the MRS volunteers, led by Robyn Gardner-Gee, who did a great job setting up the fake gannet colony." 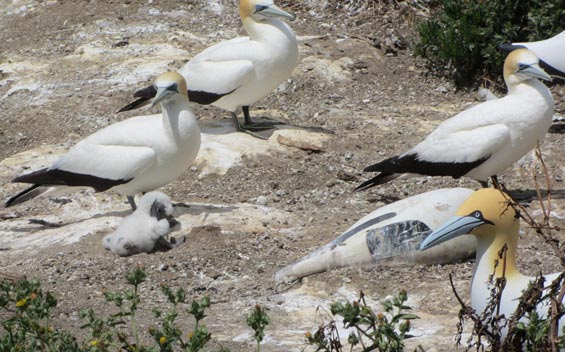 Fake gannets are among the company of the new chick

Motuora is an 80-hectare island north of Auckland. It's five kilometres east of Mahurangi Heads, between Orewa and Warkworth. The island is a safe haven for native wildlife, like gannets, as it's free of pests such as rats, stoats and possums that are deadly to native wildlife and have a devastating effect on native forest.

A pa site at the southwest end of Motuora is a sign of early Maori settlement. European settlers cleared the native forest and it was farmed for most of last century. It was bought by the government of the day in 1965 to be a recreation reserve.

In 1990 volunteers began a programme to restore Motuora's native forest and wildlife. The

Motuora Restoration Society (MRS) was formed in 1995. A nursery was established and since 1995 MRS volunteers have planted 300,000 native trees on the island.

MRS manages Motuora in partnership with the Department of Conservation (DOC).

"The birth of the gannet chick is a fantastic achievement by the Motuora Restoration Society volunteers," says DOC spokesperson Liz Maire.

"It's a great example of the tremendous work these volunteers are doing to restore the natural heritage of this beautiful pest free island."

Each gannet pair lays one pale blue-green egg which both parents incubate under their webbed feet for about 44 days until they hatch.

Young leave the nest at around 93 to 115 days old. Most of the young cross the Tasman Sea soon after fledging and spend their early years on islands of the coast of Tasmania and Victoria in Australia until they return three to seven years later. They first breed at five 5 years or older.