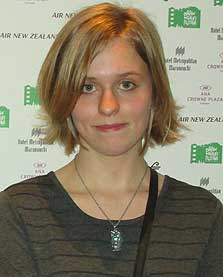 “We are incredibly proud of Natasha’s win at the Japan Wildlife Film Festival,” says Mr Morrison.

“Her film took a big idea and told the story of our need to live in harmony with nature in a simple, captivating and universally understandable way.”

“That she is the youngest person to be nominated and win at this film festival is a testament to the power of young people to impress and influence on the world stage.”

The nub of Natasha’s film—to look after our environment so it continues to look after us—is also the essence of the conservation challenge in New Zealand, says Mr Morrison.

“We all depend on the natural resources and services that nature provides and we all have a role to play in protecting them.”

The Department of Conservation (DOC) works with The Outlook for Someday project as part of its partnership with the community to achieve more for conservation.  Empowering youth is an important part of this.

DOC’s Big Picture Award is aimed at challenging young people to make a film that shows how our natural world is critical to our survival.

Arboraceous, a four minute animation without dialogue, tells the simple story of the need to renew the things on earth we use to survive instead of trying to find a new planet.  The film was up against 46 other wildlife films from 15 countries in the festival which ran from 8-11 August.

The Department of Conservation is a partner of The Outlook for Someday sustainability film challenge for young people and has sponsored the Big Picture Award since 2010.

Anyone up to age 24 can enter the challenge with a film up to five minutes long, of any genre and filmed with any camera.  The 2013 entry deadline is 13 September.

Aboraceous also won the Body Shop Standout Winner Award in 2012 of The Outlook for Someday sustainability film challenge.  Natasha’s prize included a scholarship to a Unitec filmmaking course, which she will attend next year.

The Japan Wildlife Film Festival, started in 1993, receives over 400 film entries from more than 50 countries and is attended by some 30,000 people who come from all over Japan.