The Department of Conservation is condemning the shooting of two seals on the Kaikoura coast and is asking for public help to find whoever is responsible for the killings.

The Department of Conservation (DOC) is condemning the shooting of two seals on the Kaikoura coast and is asking for public help to find whoever is responsible for the killings.

A female seal and pup, thought to be about 11 months old, were found with gunshot wounds to their heads at Ohau Point seal colony, north of Kaikoura, on Saturday 20 July. They were found just below the Ohau Point seal lookout beside State Highway One. The dead seals were about 50 metres apart and it is not known if the female was the pup's mother. 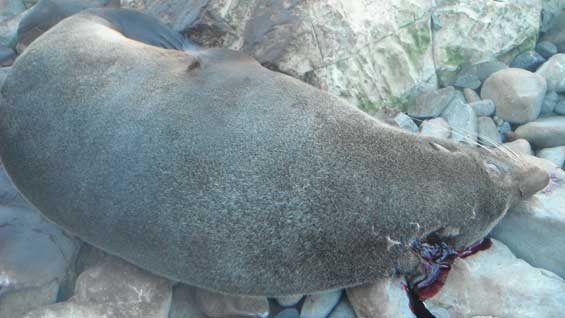 "It is deeply disappointing that some person or persons would deliberately and callously shoot two fur seals in the head.

"New Zealand fur seals are protected by law and it is an offence to kill or harm them. We are seeking help from the public to find whoever is responsible for killing these seals. Anyone with information is asked to contact our DOC South Marlborough office, +64 3 572 9100 or Kaikoura police.

"Most people thankfully respect seals and appreciate seeing them on our coast. Ohau Point is a popular stop-off between Picton and Kaikoura to view seals. The Ohau Stream waterfall pool inland from the seal colony, where seal pups gather and play between May and September, has become a highly popular attraction with around 12,000 visits a month."

A volunteer from the Ohau Seals Volunteers, who help educate people visiting the seal pup pool about seals, found the two shot seals around midday on Saturday and reported it to DOC.

In late 2010, 25 seals, including pups, were found beaten to death at Ohau Point seal colony. Two men were later arrested. One man was convicted in relation to the seal killings and the trial of the other man in relation to it is scheduled to take place in September.