A recent water sample collected by the Department of Conservation (DOC) and Fish & Game confirmed the presence of the invasive freshwater algae didymo in Fiordland’s Large Burn valley.

A recent water sample collected by the Department of Conservation (DOC) and Fish & Game confirmed the presence of the invasive freshwater algae didymo in Fiordland’s Large Burn valley.

It is the first time that a river west of the divide has provided a positive didymo sample and is a hugely disappointing result in the battle to keep Fiordland didymo-free.

The Large Burn (which drains into Caswell Sound) is infrequently visited by fishing and hunting parties. “We’re at loss to know how didymo got here, given anglers are strictly required to obtain a ‘Clean Gear Certificate’ before entering Fiordland to fish,” said Fish & Game field officer Bill Jarvie.

“Fish & Game has worked hard alongside DOC, physically cleaning fishing gear prior to certifying anglers to enter Fiordland. Hunters aren’t subject to the same strict requirements, but they too have been actively encouraged to Check, Clean and Dry their gear.” 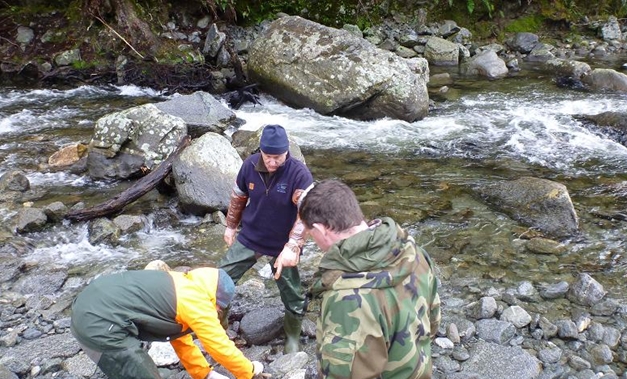 The incursion into the Large Burn valley is the first positive didymo sample in Fiordland since 2010 where it was discovered in the lower reaches of the Iris Burn River. Together Fish & Game and DOC collect the samples from high risk waterways around Fiordland each year.

Mr Jarvie and DOC freshwater ranger Lyndsay Murray were both disappointed with the result. “It’s pretty gutting really – it’s the first confirmed positive sample of a waterway west of the divide,” said Miss Murray. “The geographic barrier of the mountains that helped keep it out of remote Fiordland has been breached.”

The suspicious algal bloom was alerted to DOC and Fish & Game by a local helicopter operator who had heard a report from a client that they had dropped in to the area that they believed Large Burn was affected. Everyone is thankful to the helicopter operators who have helped advocate and keep the ‘Check, Clean, Dry’ message in clients’ minds.

In the past, reports from observant anglers have come to DOC and Fish & Game regarding finds of suspicious algae from other rivers. Although these reports have generally come back negative, DOC and Fish & Game appreciate the vigilance shown by users.

Western Fiordland remains one of the “last frontiers” of rivers to remain free of didymo in the South Island, despite it being so close to the Waiau River, where didymo was first discovered in 2004.

This could be attributed to the fact that didymo managers in Fiordland have implemented additional controls to prevent the spread of didymo, such as the Clean Gear Certificate for all anglers wanting to fish in backcountry Fiordland, as well as cleaning stations at lakeside huts.

Up until now it was thought that these controls were working well. A review of the controls implemented for didymo control in Fiordland is currently taking place as a result of the Large Burn discovery. This positive sample serves as a harsh reminder that if someone neglects to follow the protocol, this is the potential outcome.

While it is devastating that didymo has been found west of the divide, it is no excuse to give up on preventing its spread. “Strictly following the ‘Check, Clean, Dry’ methodology must be undertaken when you are using or crossing waterways, and if you are moving up or between different catchments,” said Miss Murray. It is easy to make sure you are not carrying didymo by checking, cleaning and drying, and we can prevent further spread through these actions.

Check: Before you leave a river or lake, check items and leave debris at site. If you find any later, treat and put in rubbish. Do not wash down drains.

Clean: Detergent: soak or spray all surfaces for at least one minute in 5% dishwashing detergent or nappy cleaner (two large cups or 500mls with water added to make 10 litres); OR

Dry: Drying will kill didymo, but slightly moist didymo can survive for months. To ensure didymo cells are dead by drying, the item must be completely dry to the touch, inside and out, then left dry for at least another 48 hours before use.

If cleaning or drying is not practical, restrict equipment to a single waterway.