The Department of Conservation is asking for public help following the shooting last month of a critically endangered New Zealand sea lion/rāpoka/whakahao in Stewart Island.

The Department of Conservation is asking for public help following the shooting last month of a critically endangered New Zealand sea lion/rāpoka/whakahao in Stewart Island.

The young female sea lion was shot with a .22 rifle and found dead on the island in mid June. A DOC investigation has so far failed to identify the culprit and the department is appealing for anyone with information to come forward.

DOC’s Biodiversity Programme Manager on Stewart Island/Rakiura, Brent Beaven, says the animal would have suffered for some time before it died and he is very concerned about the shooting.

“Our sea lions are critically endangered. They are only found in New Zealand. There are only around 10,000 of them left and their numbers are declining,” says Brent.

“New Zealand sea lions are known to sometimes be boisterous and appear aggressive, especially when defending their young.  But, if a few simple rules are followed, they pose no danger to humans.”

“As the weekend seal shootings in Kaikoura have highlighted, we need the public to help us safeguard vulnerable marine mammal species. If anyone has any information about this Stewart Island incident they should contact the police or 0800 DOC HOT (0800 362 468).”

“There is nothing to suggest these two incidents are linked apart from the fact they both involve senseless killings. We take all deliberate attacks on marine mammals seriously and wherever possible, prosecute anyone found responsible,” says Brent. 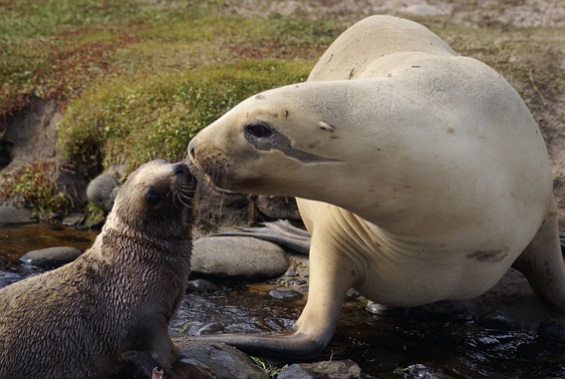 The sea lion was reported dead at Port Adventure, Stewart Island, by a member of the public on 11 June. DOC staff collected the animal and sent it to Massey University for necropsy. The vet team at Massey determined that the sea lion had been shot in the head by a .22 calibre rifle, dying as a result of the damage inflicted by the gunshot.

Mr Beaven says DOC has talked to the party who reported the incident and any boat operators known to be in the area at the time but still has no clear leads on the shooting.

“An additional frustration for us is that we were following the female’s movements around Rakiura using satellite tracking equipment only two months before it was shot. We have now lost any further information it could have provided to help us understand where the animals feed and travel in order that we can better protect the species. This was a sad and needless death.”

Mature males are brown to black in colour with well-developed manes reaching to the shoulders.  Females are lighter in colour, predominantly creamy grey with darker pigmentation around their flippers.

Pups of both sexes are chocolate brown with paler areas around the head. Juvenile males can resemble adult females in colour and size.