Record numbers of both local and international visitors have been using Department of Conservation (DOC) campsites in Fiordland this summer.

Record numbers of both local and international visitors have been using Department of Conservation (DOC) campsites in Fiordland this summer.

Comparing this year to last, there were five to six thousand more individuals staying in DOC campsites. An increase in visitor numbers has kept DOC staff busy managing the facilities, said DOC ranger Ren Leppens. This summer 30,500 campers were recorded in DOC-run campsites in Fiordland. 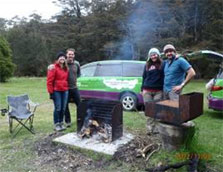 Happy campers at a DOC campsite

This season an upgrade to the DOC campsite at Henry Creek made more sites and facilities available for campervans and tents. Privately run campgrounds in Te Anau as well as DOC's Henry's Creek campsite proved very popular for those wanting to stay close to Te Anau, especially with the closure of Queens Reach as an overnight campsite.

On top of usual duties, January's spectacular weather events added to the busy season. Mr Leppens said, "At one point, Deer Flat campsite had the Eglinton River running through it". The same weather event threw trees across the road to Lake Gunn camp, closing it for several weeks. Despite these patches of bad weather it was a great summer overall, with many people out exploring Fiordland National Park and enjoying public Conservation Land, said Mr Leppens.

Rockfall hazard around the Homer Tunnel increased the frequency of Milford Road closures. Rangers found visitors whose plans changed last minute often stayed at campsites along the Milford highway while waiting for the tunnel to re-open.

Mavora Lakes, a popular summer camping destination, had a typically busy season. Some inconsiderate motorbike use affected other users, but was the only incident reported this season.