The Department of Conservation is asking Nelson Tasman residents to step up searches for great white butterfly caterpillars and eggs in their gardens and report any found with an expected autumn surge in butterfly breeding now underway. 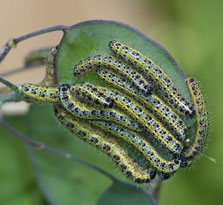 The Department of Conservation (DOC) is asking Nelson Tasman residents to step up searches for great white butterfly caterpillars and eggs in their gardens, and report any found, with an expected autumn surge in butterfly breeding now underway.

DOC is also calling on the public to help kill great white butterflies to prevent their laying eggs and curb the rising butterfly numbers.

DOC Motueka Area Manager Martin Rodd said it was critical for the success of great white butterfly eradication programme to knock back this spike in butterfly breeding which is expected to last into June.

‘We have brought in more staff to intensify searches for infestations and take other steps needed to counter this butterfly surge.

‘The help of the Nelson Tasman people though is essential to getting great white butterfly numbers down and preventing their spreading further. We are getting great support from local people and in pulling together as a community we can clear this major pest from our region and New Zealand.

‘We are asking people to look for caterpillar and eggs and report findings of them to the Ministry for Primary Industries (MPI) hotline 0800 80 99 66.

‘The tiny, yellow eggs and the caterpillars are found in clusters on host plants particularly nasturtium, honesty and brassica vegetables such as broccoli and cabbages. Caterpillars are very small at first and in later stages are speckled black and greyish-green with three yellow lines along their bodies

‘We want people to kill the butterflies. I know this sounds harsh but it is absolutely essential if we are to have a chance of winning against this pest.

‘Butterflies can be caught with nets or tennis and badminton racquets and then should be squashed.  People shouldn’t worry about killing the similar-looking small white butterfly by mistake, as it is also a garden pest.’

The great white butterfly poses a major threat to commercial and home brassica crops and to native cresses. Its caterpillars voraciously feed on host plants.

DOC is also asking people to remove or cut back nasturtium, a butterfly breeding favourite. If people don’t want to remove nasturtium plants they are asked to keep checking them for caterpillars and eggs and report any found.

Since the butterfly was first found in Nelson city in 2010 it has spread to Richmond with a few isolated finds further out in Tasman. Recently, caterpillars were found in a garden at the Glen, further north-east of Nelson than previous reports. No other great white butterfly infestations were found in searches in the surrounding area.

The caterpillar’s appearance changes as it grows. When very young, the tiny caterpillars are yellowish with a shiny black head. In later stages, it is speckled greyish-green and black and has three yellow lines along its body. Larger caterpillars have lots of pale hairs and, when fully grown, are 50 mm long. In contrast, the small white butterfly caterpillar is uniformly green with a faint yellow line along the top of its body and is about 30 mm long when fully grown.