Two bridges that help trampers and hunters access the most remote corners of the West Coast have been replaced, in time for the autumn roar.

Two bridges that help trampers and hunters access the most remote corners of the West Coast have been replaced, in time for the autumn roar.

The Lambert River and Hende’s Creek are both wild tributaries of the Wanganui River, which recently flooded in a spectacular fashion, destroying the abutments of the highway bridge.

It’s necessary to cross both the Lambert River and Hende’s Creek to access some of Westland’s wildest country – the Lambert Tops and the Gardens of Eden and Allah, within the Adams Wilderness Area. Hende’s Creek also allows access to the upper Wanganui Valley and the much loved Hunters and Smyth Huts.

The bridges over these two waterways were damaged in 2008 and 2009 – the Hende’s Creek bridge became unustable and the Lambert River bridge was destroyed. 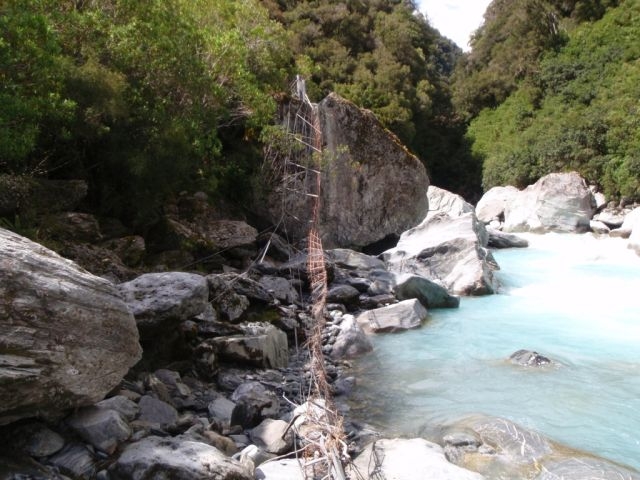 The Lambert river bridge was destroyed by flooding in 2008

“It can be pretty hairy trying to walk out from the wilderness area and the Wanganui in heavy rain,” said DOC ranger Ian Singleton.

“In fact, the original Hende’s Creek bridge was built in 1988 in a joint effort by DOC and the NZ Army after a man was drowned attempting to cross the flooded creek.”

The Lambert River Bridge, first built in 1976, was destroyed by a slip 6 months after major upgrade work was undertaken in 2008.

The large unstable slip was above the best anchor point in the Lambert River valley and DOC has been waiting to be sure the slip had stabilised before replacing the bridge. As the slip was unchanged after January’s flood event, and vegetation had started to regrow over the slip this indicated that work could begin.

Abseil Access undertook the work for DOC, and taking advantage of settled weather in February constructed the two bridges – a three wire swing bridge over Hende’s Creek, and a 6 wire NZFS-style swingbridge over the Lambert River.

“Abseil Access have done a sterling job with the bridges and being able to build two in the same valley at once has been really efficient” says project manager Tony Preston, “Now we just have to hope that nature allows us to keep our bridges for more than 6 months this time!” 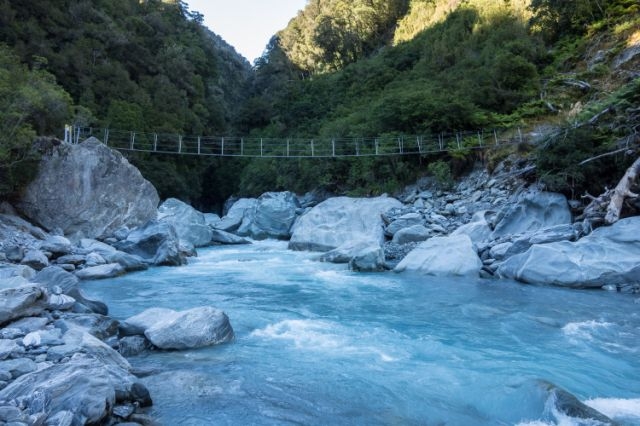 The completed Lambert River bridge in 2013