Jiezhen Jiang was sentenced in the Manukau District Court today (Wednesday July 10) and is the first person to be convicted for illegally importing ivory into New Zealand.

Jiang pleaded guilty in April to eight charges of trading in an endangered species without an appropriate permit. He's retired and lives in Mellons Bay in east Auckland.

Judge Jonathan Moses convicted Jiang and fined him $1500 on each of the eight charges making a total fine of $12,000. Jiang was also ordered to pay court costs of $132.81.

A global ban on commercially trading ivory was imposed in 1989 because African and Asian elephants are an endangered species at high risk of extinction. The trade ban was imposed by 175 countries - including New Zealand - that are parties to the Convention on International Trade in Endangered Species of Wild Flora and Fauna (CITES).

Roughly 5000 species of animals and 29,000 species of plants are protected under CITES. Currently 178 countries are signatories to CITES. The illegal trade in endangered species is worth billions of dollars a year. 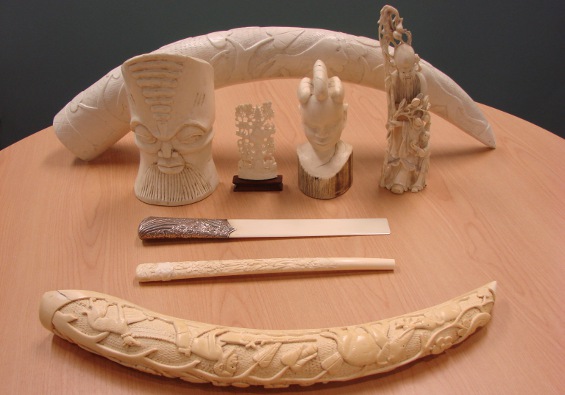 The eight ivory items that cost an Auckland man $12,000 in fines

The charges against Jiang relate to eight items proven by forensic testing to have been made from tusks taken from African elephants. The items are a letter opener, a parasol handle, a statue of a man and boy, a face mask, a caved woman's head, a carved scene on a wooden base and two carved tusks.

Two of the ivory items were in a parcel intercepted at the International Mail Centre in Auckland after being posted from Portugal and England.

The remaining six ivory items were seized from Jiang's home in October, 2011 following the execution of a search warrant by investigators from the Department of Conservation, Ministry for Primary Industries and New Zealand Customs Service. The search was carried out at the same time as a search warrant in Cheltenham, England, at the house of one of those responsible for sending ivory to Jiang.

"This is the first time someone has been prosecuted, convicted and sentenced for illegally importing ivory into New Zealand," says Dylan Swain, Senior Investigator with the Department of Conservation (DOC).

"We're pleased with the outcome of this case. It sends a strong signal that anyone attempting to illegally import ivory, or any other endangered wildlife specimens, into New Zealand, will be taken to court."

"The illegal trade in ivory threatens the survival of African and Asian elephants. These magnificent animals are at high risk of extinction because poachers continue to kill them for their tusks despite a global ban on trading in ivory."

"New Zealand needs international support protecting our endangered species from being exploited. So we have a responsibility to help protect threatened wildlife in other countries such as elephants"

"This successful prosecution would not have been possible without the cooperation of government agencies within New Zealand and assistance from the United Kingdom's National Wildlife Crime Unit" says Dylan Swain.

A person convicted of importing endangered wildlife specimens into New Zealand without a permit faces maximum penalties of up to five years imprisonment, a fine of up to $100,000, or both imprisonment and a fine up to these maximum levels.

Everyday items and activities often contain CITES protected plants or animals. See which ones apply to you.

Patrick Cooper is the second person in New Zealand to be convicted for importing elephant ivory illegally.