A Department of Conservation and University of Auckland research team leaves Lyttelton today for Antipodes Island to do groundwork for the removal of mice from this remote nature reserve.

A Department of Conservation and University of Auckland research team leaves Lyttelton today for Antipodes Island to do groundwork for the removal of mice from this remote nature reserve.

The four researchers will travel more than 800 km aboard the 15-m yacht, Tiama, to the sub-Antarctic island where they will spend one month, in what is only the third ever winter research trip.  The expedition is supported by the National Geographic Society.

The aim is to fill gaps in knowledge about the mice and effects of their removal on some of the island’s special native species, in particular the two parakeets—Antipodes and Reischek’s parakeet—which are found nowhere else.  They will also gather baseline data to chart ecosystem recovery once mice are gone.

DOC scientist and team member, Graeme Elliott, says the research will gauge the effects of spreading bait at this time of year (when the mice would be targeted) including effects on non-target species like parakeets. 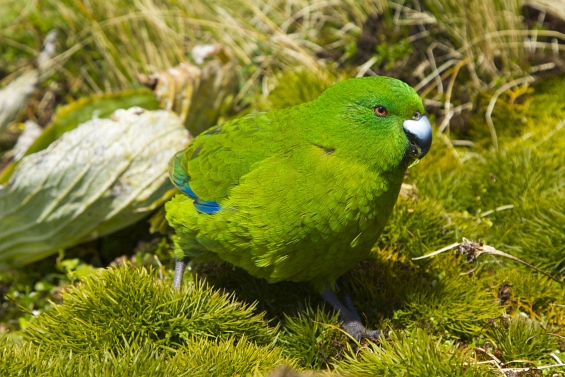 “We need to learn more about the parakeets in winter and the risk of their eating bait so that this can be minimised and managed.  We will also trial holding parakeets in captivity, if this is needed during the eradication.”

Trials in summer have shown low (non-toxic) bait uptake by parakeets but further work is needed to safeguard these birds, which may be vulnerable, says Elliot.

Other birds such as Antipodes pipit and snipe and also insects will be studied, as well as grey petrel, which is at risk of predation by mice and in decline.

Award-winning University of Auckland scientist, James Russell, will lead the mice research, which includes estimating numbers and bait uptake.  Russell recently published an analysis of over 40 years research on Antipodes Island mice in the journal Polar Biology and estimated their density at up to 150 mice per hectare.

“Removing mice from Antipodes Island would be the largest mouse-only eradication in the world, and would restore the island ecosystem to its pre-sealing and whaling days prior to human impact.”

Although unlikely to occur until 2015 at the earliest, the eradication is looking promising with funding from Gareth Morgan’s Million Dollar Mouse campaign now sitting at over 80% of its target.

Clearing mice from the Antipodes Islands is a challenging and ambitious project that would benefit the islands’ unique ecosystems, native seabirds, plants and insects. 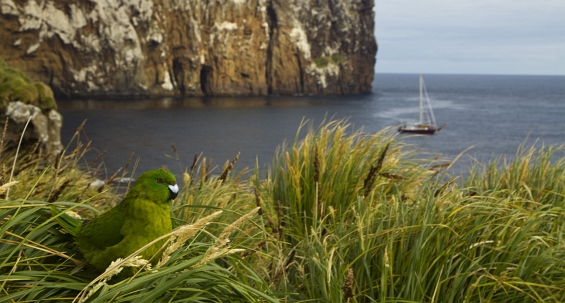 The expedition team includes: DOC scientists Graeme Elliott and Terry Greene, and from Auckland University: Senior lecturer in Biological Sciences James Russell and researcher Helen Nathan.  All team members except Helen have previously worked on Antipodes Island in summer, and Graeme has done six summer trips.  Research teams have previously visited the island in winter in 2001 and 2010 studying grey petrel.

The Antipodes Island group lies 860 km southeast of Stewart Island/Rakiura and is part of the sub-antarctic islands World Heritage Area.  The islands are home to a wide range of rare wildlife and plants, including two parakeet, Antipodes Island snipe and pipit, and at least nine endemic insect species.  Antipodean wandering albatross and burrowing petrels breed on the island and erect-crested and rock hopper penguins are also found there.

Mice—thought to be introduced early last century by shipwreck—threaten insects and plants, as well as birds eggs and young chicks on the islands.

The Million Dollar Mouse campaign was initiated by economist and philanthropist Dr Gareth Morgan and aims to raise more than a million dollars towards the mouse eradication project.  The fund currently sits at $819,000 with all public contributions matched dollar for dollar by Gareth and Jo Morgan.

Watch a video of Antipodes parakeets.