A safe home for the world’s most ancient alpine songbird

A group of individuals have taken steps to prevent our rock wren from extinction. 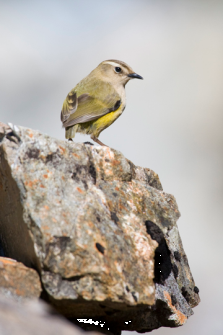 It is well known that Aotearoa holds a large number of unique species found nowhere else on earth. What many of us do not know is that without protection some of these species will go extinct within the next 50 years. Sadly, most of these critters are small and cryptic and therefore will disappear unnoticed.

Thankfully a generous group of individuals have not only noticed our pocket sized alpine rock wren (Maori name tuke), but they have taken steps to prevent this unique species disappearing from the face of the earth.

Fauna Recovery New Zealand and Fiordland Helicopters have worked closely with the Department of Conservation over the last decade in an effort to better understand this species’ current situation, and to improve its chances of long-term survival. As part of this, the team translocated 41 rock wrens to Secretary Island at the mouth of Fiordland’s Doubtful Sound over 2008-2011. The only introduced predator present, the stoat, is controlled to levels far below its numbers on mainland Fiordland.

DOC Ranger Megan Willans said “We are delighted to announce that translocation efforts have been successful and the first population of rock wren on an inshore island are establishing well. The increased safety of the island, a place where predators pose a lesser threat, provides insurance against the birds’ steady demise on the mainland”. A team of bird surveyors found sixty-six rock wrens on Secretary Island in April this year (2013), of which sixty-three hatched and fledged on the island – indicating the birds have settled in well enough to breed.

You might ask who cares? Well aside from protecting wildlife and natural landscapes to maintain a healthy environment for us all, the rock wren is the only true alpine bird in Aotearoa and most significantly is one of the most ancient bird species in the world. Rock wrens are one of seven New Zealand wrens, a group of birds like no others in the world, forming the most ancient suborder of all song birds Acanthisittidae. They stem from a species present over 80 million years ago and have no close structural resemblance to any other group of birds in the world. Of the seven wren species that lived in New Zealand when humans arrived sadly the rock wren and the rifleman are the only two species surviving today.

Barry Dent from Fauna Recovery New Zealand said “we were delighted to be part of this project as it provides an insurance policy for a bird which ought to be as iconic as the kiwi, but because it isn’t part of the so-called Charismatic Megafauna, it escaped notice by funders and everyone but the small, tenacious, skilled rock wren team.”

Rock wrens live in alpine and sub-alpine habitats throughout the western half of the South Island from the Nelson Lakes, through Westland to Fiordland. However, their distribution is now fragmented, and recent sightings indicate that about twenty percent of known localities have had no sightings in the past 20 years.

The first attempt to translocate rock wrens to Anchor Island in Dusky Sound was unsuccessful. This was probably due to lack of alpine habitat and maybe an inadequate founder population, but this didn’t discourage Fauna Recovery New Zealand and Fiordland Helicopters from a second attempt. Secretary Island is the third tallest island in New Zealand offering a good network of sub-alpine habitat.

Rock wrens are vulnerable to predation by stoats and mice. Both species prey on rock wren chicks and eggs on the nest and stoats also take adults at nest sites. Sometimes this has dire consequences for rock wren populations, as was observed at Homer Tunnel and the Gertrude Valley near Milford Sound last year. Camera footage at rock wren nests showed stoats to be a significant predator at nest sites for this population.

The next challenge is to control predators to a level that protects rock wrens at sites on mainland Aotearoa where suitable habitat is plentiful.

A small and reclusive bird, rock wrens are restricted to pockets of the South Island’s high country.