A feel good whio story unfolded when a hunter sent in a photo of a banded whio in the upper Rangitikei River.

A feel good whio story has become a hunter’s yarn after Nigel Smith shared his exciting whio sighting this week during the Roar in the Kaimanawa Forest Park. A banded male whio has found his territory and partner in the upper Rangitikei River, 64km from where he was released, after being rescued by the Department of Conservation’s whio team.

The whio was rescued by the whio team as an egg from a nest that was at risk of flooding on the Whanganui River in 2006, and the duckling was raised in captivity. The whio was banded and released as a juvenile in the Whakapapa River in April 2007, and was seen on the river up until September 2007. It was not until 2010 when the whio was next sighted by keen back country hunter Nigel Smith on the Rangitikei River. Mr Smith was excited to spot the whio again this week in the upper Rangitikei with another whio, and sent the photo to the Department of Conservation. Whio team ranger Alison Beath says “It is really exciting and rewarding to know this whio is still alive, but better still that he has found a mate to breed with.”

The banded whio travelled a long way to find his new home and mate. Whio pairs establish exclusive territories occupying the same stretch of river year after year which they defend aggressively. Whio are strong flyers and likely reached its final destination by travelling up rivers, streams and tributaries.

The whio team know this whio as WR-OM. Banded birds are read from left leg to right, top to bottom. This bird has a white plastic band over red on his left leg, and orange over a metal band on his right leg. New technology now sees whio micro-chipped for identification which has less impact than bands on the birds in the wild.

If you see a whio, banded or otherwise, or other banded native birds in the wild, please contact your local Department of Conservation office with the date and where you sighted the bird, and if possible provide the co-ordinate readings. If the bird is banded a photo is helpful. These sightings are entered into a national biodiversity database that helps the Department of Conservation understand more about individual species, ecological habitat and the health of the environment. 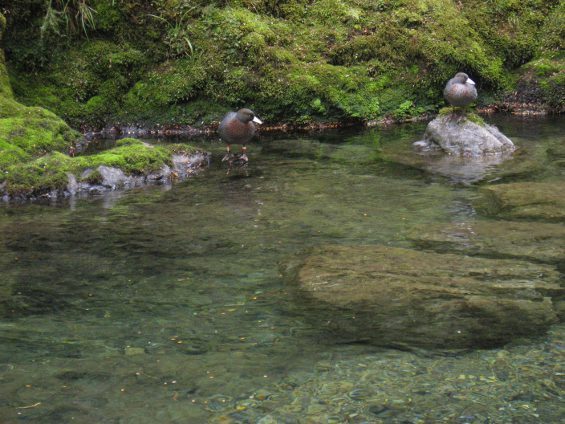 Banded whio and mate in the upper Rangitikei River. Photo sent in by hunter Nigel Smith.