A ‘birdie’ for conservation

Wairakei Golf + Sanctuary in Taupō are playing above par for conservation by allowing DOC to use their predator proof fence as a crèche for kiwi chicks. 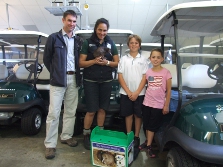 A young golfer and kiwi chick are both developing strong at the Wairakei Golf + Sanctuary. Twelve year old Dylan Bagley came to practice his golf swings after school, and ended up helping release a baby kiwi.

Ten kiwi chicks will be released within the golf course that is protected by a predator proof fence over the spring and summer months.

Dylan and his family were in the right place at the right time to get a kiwi experience of a lifetime - helping the Department of Conservation kiwi team release a chick into the forest. Dylan couldn’t wait to go to school the next day and say, “You’ll never guess what I did at golf last night?!”

The Tongariro chick was named ‘Georgie’ as she hatched on the date of Prince George’s christening.

DOC are using the private sanctuary as a local opportunity to crèche baby kiwi chicks. “Partnering with DOC has allowed us to contribute to the conservation of one of New Zealand’s endangered species and broadens the experience of our golfers” says Nigel Lloyd, Wairakei Wairakei course manager. 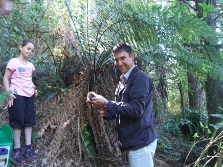 Georgie is released by David Speirs and Amy Bagley (9yrs)

Mr David Speirs, DOC’s new partnership director for the Central North Island region, also attended the release on only his third day in the job saying, “This partnership is a leading example of the relationships I want to help develop in this region”.

The use of the local sanctuary has many advantages for the Tongariro Kiwi Team, not only reducing travel time for rangers and volunteers, but also experiencing the novelty of transporting kiwi in golf carts!

BNZ Operation Nest Egg (ONE) enables DOC to take kiwi eggs from the local Tongariro Forest, one of five national sanctuaries for kiwi. The eggs are hatched at Rainbow Springs Kiwi Encounter and reared to about 400g. The chicks then stay at Wairakei until they weigh about 1kg, big enough to fight off stoats, giving them a higher chance of survival for their release back into the wild.

While young Dylan has a promising future in golf with a handicap of 12, Georgie is lowering her handicap without having to play against stoats. It would also be fair to say that Wairakei Golf + Sanctuary are playing above par for conservation with this birdie!