4WD use encouraged by DOC’s CMS

The Department of Conservation (DOC) wants more people to make the most of Otago’s four-wheel drive roads and rugged routes and is asking four-wheel drive enthusiasts to have their say about their hobby.

The Department of Conservation (DOC) wants more people to make the most of Otago’s four-wheel drive roads and rugged routes and is asking four-wheel drive enthusiasts to have their say about their hobby.

DOC has outlined its policy on four-wheel driving in its recently released draft Conservation Management Strategy (CMS) for Otago, which will guide DOC’s management of conservation land, wildlife, cultural heritage and recreation in Otago for the next 10 years.

The CMS highlights areas that are available for four-wheel driving such as Oteake Conservation Park in Central Otago, Macetown and Skippers near Queenstown and Te Papanui near Dunedin.

Wanaka Area Office Manager Paul Hellebrekers says Otago has a range of challenging routes on conservation land which DOC would like to promote for four-wheel driving but he asks that drivers stay on the roads so as to protect the fragile high country terrain.

“There are many opportunities for four-wheel driving on public conservation land, especially on roads running through areas that were formerly pastoral leasehold land,” Mr Hellebrekers said.

Four-wheel driving on conservation land near Wanaka occurs within the Pisa Conservation Area and access is allowed under a permit system introduced in 2008 after four-wheel drives and trail bikes damaged sensitive and fragile wetland areas on top of the Pisa Range. 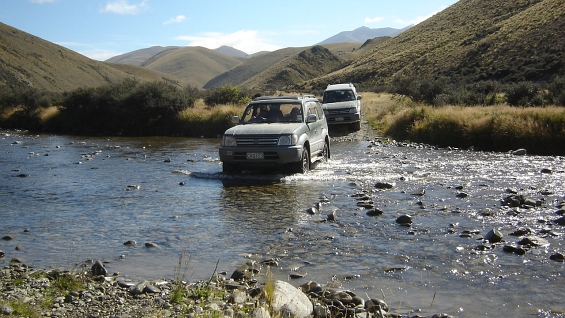 Mr Hellebrekers said the Pisa Range permit system works well, at no cost to drivers, and satisfies adjacent neighbours who also had concerns about the behaviour of drivers. Permit applications are available on the DOC website.

In the Skippers area, DOC and Shotover four-wheel drive club members are developing a management agreement formalising how the club can continue to use the route into Skippers Creek in exchange for club members maintaining the route.

“This is a gnarly route with lots of steep inclines that is popular with drivers because it allows them to push their drive training and experience to the limit,” Mr Lind says.

Shotover club members had some input into development of the draft CMS.

Sometimes DOC restricts access for four-wheel drive vehicles during the winter and if there is a health and safety or fire risk. This avoids damage to roads and tracks and minimises conflict and public safety issues.

Central Otago has spectacular 4WD opportunities, many of which are also through former pastoral leasehold land. While there are some ongoing issues where users have ignored locked gates and driven over fences, in the main the public are responsible and stay on formed tracks. Road maintenance work by DOC has decreased the number of issues with track surfaces and concessionaires and the public are quick to advise DOC of damage and instances where fences are down or locks have been damaged.

“These fragile wetlands and bogs in the wetter coastal area are prone to damage and can take decades to recover. Drivers also braid the tracks, (vehicles strike soft ground and go around it) but we have largely solved this by both liaising with the local clubs and ‘armouring’ the main route to provide a more solid base,” Mr Thomas said.

“The majority of vehicle users are responsible and respect these sites. Unfortunately, it only takes one or two people to create a problem.”

DOC is encouraging four-wheel drive and motor-bike clubs to “adopt a track”. “Come and talk to us about your ideas for good routes. We can find ways you can help, like removing water from tracks and distributing gravel onto boggy sections. We want to provide opportunities for vehicles in the back country and we encourage clubs to hold working bees on sections of tracks to allow that,” Mr Thomas said.

The public can view the draft Otago CMS on the DOC website. This website also includes a submission form and information on how people can make a submission. Submissions are open until 13 September 2013.