The return of 12 juvenile rowi kiwi to the Ōkārito Kiwi Sanctuary today includes the 200th of this rare species to be raised through the successful BNZ Operation Nest Egg programme.

The return of 12 juvenile rowi kiwi to the Ōkārito Kiwi Sanctuary today includes the 200th of this rare species to be raised through the successful BNZ Operation Nest Egg programme.

The 12 birds, which spent the last 11 months on predator-free Motuara Island in the Marlborough Sounds, were blessed by Kāti Mahaki ki Makaawhio at the Westland National Park Visitor Centre in Franz Josef before being released into the Ōkārito forest.

Rowi has been brought back from a population low of fewer than 200 birds in 1998 to about 400.  The birds released today were taken as eggs from the forest and incubated and hatched at the West Coast Wildlife Centre in Franz Josef. “If these birds had been left to hatch in the wild 95% would have been killed by stoats.  But this programme allows us to boost the population by removing the eggs and chicks when they would be most vulnerable and returning them when they are big enough to fend off stoats.”

Under this programme the number of birds reaching adulthood has increased from two to about 34 per year.  Controlling rat and stoat numbers in the sanctuary is also important for ongoing rowi survival as well as benefitting other species.

Kiwi trust Kiwis for kiwi, a key supporter of rowi recovery, has been integral to the return of 200 rowi to the wild.

Kiwis for kiwi Director Michelle Impey says: “It is important to celebrate the successes, and the return of the 200th rowi to the wild is a landmark achievement.

“To bring our rarest kiwi back from the brink is truly worthy of celebration.  We’re proud of the work this team has done, and urge all New Zealanders to support them and the countless other people working hard to save kiwi.”

The rowi recovery programme is also supported by communities around the kiwi sanctuary at Franz Josef, Ōkārito and Whataroa and many local businesses. 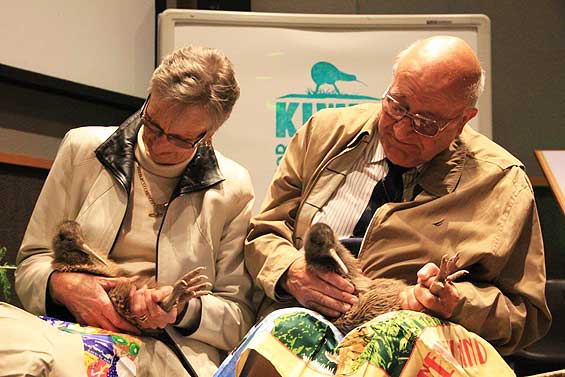 Rowi or Ōkārito brown kiwi (Apteryx rowi) is New Zealand’s most endangered of the five kiwi species.  It was found to be an entirely new species of kiwi in 1994 and given the name rowi.

Rowi were once abundant and widespread over much of the west coast of the South Island and south east coast of the North Island.  However, habitat loss and predation have reduced the last remaining rowi population to within 11,000 hectares of forest in Ōkārito, north-west of Franz Josef.

Predation by stoats is the primary reason for the low survival of rowi chicks. Rowi chicks are particularly vulnerable until they reach 1 kg in weight. Stoats have been known to predate 95% of all young rowi chicks that hatch in Ōkārito forest.

Kiwis for kiwiTM is the trading name of The Kiwi Trust. Established in October 2012, it continues more than two decades of work by BNZ Save the Kiwi Trust to help protect kiwi and the places they live. Kiwis for kiwiTM raises and distributes funds to community, DOC and volunteer groups helping save kiwi throughout the country.

BNZ Operation Nest EggTM is a powerful tool to reverse the decline of kiwi populations. Eggs and chicks are harvested from nests to save them from stoats and cats. The young kiwi are returned to the wild when they weight about 1kg, big enough to fight off these predators. More than 2000 kiwi chicks have been returned to the wild since its inception in 1994, with captive facilities and hundreds of field workers from DOC and community groups throughout the country contributing to its success

Kiwis for kiwiTM works in partnership with the Department of Conservation (DOC) with a vision to take kiwi from endangered to everywhere. Anyone can help support rowi conservation by making a secure online donation at www.kiwisforkiwi.org