Some staggering figures have been calculated in an attempt to find out what is killing Whangarei’s kiwi population.

Some staggering figures have been calculated in an attempt to find out what is killing Whangarei’s kiwi population.

It was once thought that stoats were kiwi enemy number one, and many people would also implicate cats as part of the kiwi decline. However, it turns out that man’s best friend is a kiwi’s worst nightmare. 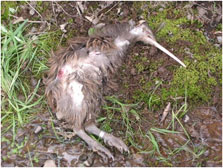 An adult kiwi killed by a dog

Kiwi populations in Northland should be thriving. The unique Northland brown kiwi lays more eggs per year than other kiwi, and can start breeding at 3-4 years. Unfortunately, the life expectancy of Northland kiwi is only 14 years, compared to 45-60 years elsewhere. This is due to dogs.

“Although stoats undoubtedly do damage to kiwi populations, it is dogs killing adult, breeding birds that is the real issue” says DOC kiwi ranger Emma Craig.
“Northland kiwi are phenomenal breeders, and can withstand reasonably high chick losses yet still have a growing population. However, if you take the breeders out, which is exactly what dogs are doing, the population decline is inevitable and dramatic”.

The number of dead kiwi that have been handed in to the Whangarei Area Office since 2000 is 324 – this equates to about 15% of the total Whangarei population. The overall population of Northland brown kiwi is about 8000.

Luckily, this problem has an easy fix. “Keep your dog under control and out of kiwi areas at all times, and make sure your neighbours do the same. This way we can keep kiwi around forever” is the plea from Ms Craig.

In some areas of Northland kiwi populations are growing by 9% per year, one of the best growth rates in the country. This is due to good dog control, predator control, and the use of BNZ Operation Nest Egg.

The best protection for kiwi from dogs is ensuring they never meet, and this is achievable in most cases. At times this is not possible, for example farm dogs moving stock near kiwi habitat, or hunting dogs that are used near kiwi habitat. In these cases kiwi aversion training can help. Contact your local DOC office for more information.