The Department of Conservation today issued a warning to climbers and trampers on Ruapehu, recommending that they do not enter the Summit Hazard Zone until further notice.

The Department of Conservation today issued a warning to climbers and trampers on Ruapehu, recommending that they do not enter the Summit Hazard Zone until further notice.

A Volcanic Alert Bulletin issued today by GNS Science summarising recent measurements at Ruapehu indicates the likelihood of eruptions from the mountain has increased.

The Summit Hazard Zone is the area within two kilometres of the centre of Crater Lake. It encompasses all the peaks in the summit area with Te Heuheu Peak on the north end of the summit area at the edge of the zone.

Climbers and trekkers should refer to the Summit Hazard Zone map or use their map and GPS reading skills, to determine when they are approaching the zone.

“We recommend that guiding companies do not take people into the zone. Any other climbers, trampers and walkers should not enter the zone” says Jonathon Maxwell, DOC Ruapehu Area Manager.

He said it was important to remember that Ruapehu was always active and went through periods of activity, and therefore was being constantly monitored.

The department keeps in close communications with GNS Science who continue to monitor the mountain closely. The department has also discussed the situation with Ngāti Tūwharetoa through Ngāti Hikairo ki Tongariro, Ngāti Rangi and Ngāti Uenuku, and advised  Ruapehu Alpine Lifts and other concessionaires.

“We will update the warning when more information is available.  Both the DOC and GeoNet websites will be kept updated,” Jonathon said.

The Eruption Detection and Lahar Warning systems operated by the department are both operational.

All facilities, roads, walking tracks, alternative routes lower on Mt Ruapehu, and other activities are fully operational within the Tongariro National Park.

People should be aware of an increased possibility of lahars on the Round the Ruapehu Mountain track people when approaching the Whangaehu, Wahianoa, Mangaturuturu and Whakapapaiti streams. They should be conscious of potential lahar noise from upstream, and make their way across these streams quickly.

Mt Tongariro and the Tongariro Alpine Crossing are not affected. 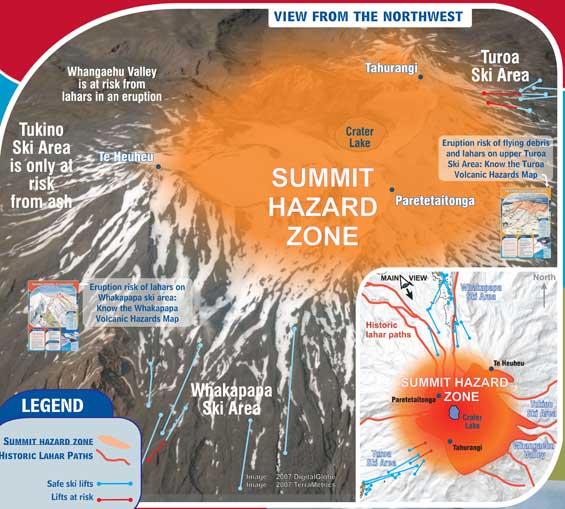