Filmmakers flock to Queenstown to film amongst the spectacular scenery of the adjoining conservation estate and Anna Humphries makes sure they leave it in the pristine state they found it.

Filmmakers flock to Queenstown to film amongst the spectacular scenery of the adjoining conservation estate and Anna Humphries makes sure they leave it in the pristine state they found it.

That’s why Film New Zealand says the Department of Conservation community relations ranger is a star. 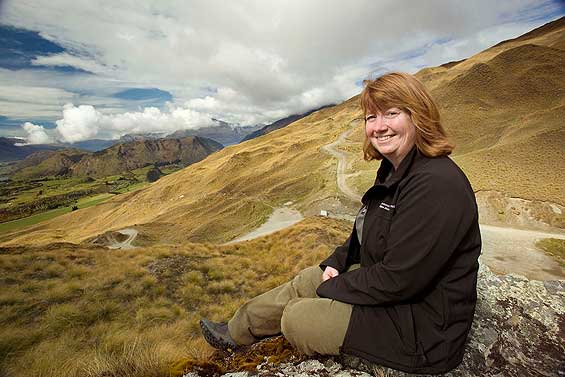 Anna  processes around 80 permits for local and international film projects each year, helping filmmakers get the footage they need without damaging the environment or impacting on the rights of other people using the area either recreationally or for business.

She is featured in a nationwide Film New Zealand advertising campaign highlighting the crucial role skilled New Zealanders working outside the screen industry played in the production of The Hobbit: An Unexpected Journey and the success of the New Zealand screen industry in general.

The Glenorchy Volunteer Fire Brigade and the entire population of Naseby have also been highlighted in the Film New Zealand campaign.

Film New Zealand CEO Gisella Carr, says that if there was an award for ‘Best Supporting Country’ New Zealand would win hands down.

“It took more than cast, crew and producers to make The Hobbit Trilogy happen. It took a huge supporting role from everyday New Zealanders like Anna who did their jobs with enthusiasm and great skill,” Gisella Carr said.

Supervising Location Manager Jared Connon, who worked with Anna on The Hobbit is full of praise for the ‘brilliant job she did safeguarding the environment while allowing film makers access to the beautiful New Zealand wilderness.’

For Anna, working with film crews is fun.

“You never quite know what you’ll be asked to consider next but they’re very professional. They understand our conditions and will go that extra mile to meet them,” she says.Film New Zealand CEO Gisella Carr says the support given by hundreds of everyday New Zealanders to our film makers is pivotal to ensuring movies like The Hobbit: An Unexpected Journey, a production of New Line Cinema and Metro-Goldwyn-Mayer Pictures (MGM), are made here.  The film, released worldwide by Warner Bros. Pictures and MGM, opens in New Zealand on December 12.

“There is an incredible passion for filmmaking here, and it goes beyond the amazing skill and talent in the industry itself. Today’s World Premiere is also an opportunity to celebrate New Zealanders’ contribution to creating international movies.”

“We have been able to highlight these people with the support of our partners, Telecom and Fujitsu who are also proud IT partners of the New Zealand screen industry.”