Sixty tuatara are now living in the wild on Motuihe Island easily accessible by ferry from downtown Auckland. 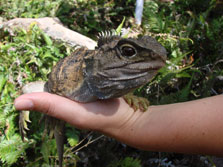 Tuatara to be released on Motuihe Island

Sixty tuatara are now living in the wild on Motuihe Island easily accessible by ferry from downtown Auckland.

The tuatara were released on Motuihe yesterday (25 March) in a translocation project led by the Motuihe Trust and supported by the Department of Conservation (DOC).

A helicopter carried the tuatara to Motuihe from Lady Alice Island in Northland. Both islands are pest free sanctuaries for native wildlife managed by DOC.

Motuihe Trust chairman John Laurence says the trust is aiming to establish a population of tuatara in the heart of Auckland that’s easy to reach and can be enjoyed for generations to come.

“Tuatara were once found all over New Zealand but were wiped out on the mainland by rats. They now survive only on islands, like Motuihe, that have been cleared of rats,” says John Laurence.

“Trust volunteers have worked hard creating a home for tuatara and other native wildlife on Motuihe by planting more than 350,000 native trees on the pest-free island.”

The 60 tuatara flown to Motuihe were accompanied on the helicopter by a kaumatua from Ngati Wai. The kaumatua and other members of the Northland iwi took part in a ‘handing over’ ceremony in which the tuatara were ‘gifted’ to representatives of manawhenua o Tamaki. 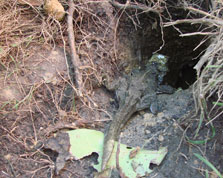 The tuatara were released into burrows prepared by the Motuihe Trust. More than 320 visitors came to the island to watch the release.

Department of Conservation Auckland Area Manager Brett Butland says DOC and the Motuihe Trust are working together to restore the natural heritage of Motuihe.

“DOC eradicated Norway rats and mice from Motuihe in 1997. We made the island completely pest-free by removing feral cats and rabbits in 2005,” says Brett Butland.

“Removing the pests, particularly rabbits enabled the Motuihe Trust to establish a nursery on the island that produces up to 55,000 native plants a year.”

“The trust is doing a fantastic job restoring the native forest on Motuihe to provide a habitat for rare and threatened wildlife.”

“The tuatara join little spotted kiwi, kakariki, tieke (saddleback), bellbird and shore skinks that the trust and DOC have released on Motuihe.”

The survival of the native wildlife on Motuihe depends on keeping the island pest-free. DOC maintains a network of traps and pest detecting tunnels on the island.

“We need everyone travelling to Motuihe, and other pest-free islands in the Hauraki Gulf Marine Park, to check their boat, kayak and gear to ensure they’re not carrying stowaway pests,” says Brett Butland.

Rats drove tuatara off mainland New Zealand. To secure their survival DOC has created sanctuaries for these unique reptiles by eradicating rats on a number of islands with tuatara populations.

The 60 tuatara released on Motuihe came from Lady Alice Island off the east coast of Northland. Lady Alice, Whatupuke and Coppermine islands are in the Hen and Chickens group of islands managed by DOC. They were cleared of Pacific rats in the 1990s.

Each island now has a self-sustaining population of tuatara. Tuatara are doing well on Lady Alice Island. The 60 tuatara moved to Motuihe represent less than 1% of the island’s tuatara population.

Tuatara were released on pest-free Tiritiri Matangi Island in 2003. The release of tuatara on Motuihe means there are now two islands in the Hauraki Gulf Marine Park the public can visit to see tuatara in the wild.