A sixteen year-old Wellington student has won the Department of Conservation Big Picture Award in The Outlook for Someday sustainability film challenge for young people.

A sixteen year-old Wellington student has won the Department of Conservation Big Picture Award in The Outlook for Someday sustainability film challenge for young people.

Natasha Bishop, a student of Samuel Marsden Collegiate, Whitby, won with her four minute animated drama ‘Arboraceous’ about the need to take care of the only planet we have. Her film was also announced as the Body Shop Standout Winner of the challenge at The Someday Awards red-carpet ceremony in Auckland.

“This is a fabulous film that captures such a complex idea in a whimsical and appealing nutshell,” said Department of Conservation’s Deputy Director General Felicity Lawrence. DOC is a partner of the film challenge and the Big Picture Award is given to a film that shows how our natural world is critical to our survival. “It’s the real challenge of our time for anyone to do but so wonderful that is comes from a strong youth voice.“

Ms Lawrence said the film challenge provided a vibrant creative avenue for young people to tell their stories about what is happening in our world. “We know from international trends that young people are increasingly disconnected from the natural world. There is a growing gap in understanding about how we rely on the planet’s biodiversity for our health and wellbeing.”

Natasha Bishop said the inspiration came to her in maths class. “I was just sitting there thinking of other things like trees and planets and thought about that one word sustainability and what it meant to me. It’s about renewing what we have.”  The prize package won by Natasha includes Unitec courses or film production facilities to the value of $8000.

A Judging Team of media, education, government and business people selected 20 winners from a record 191 entries, involving about 700 young people. 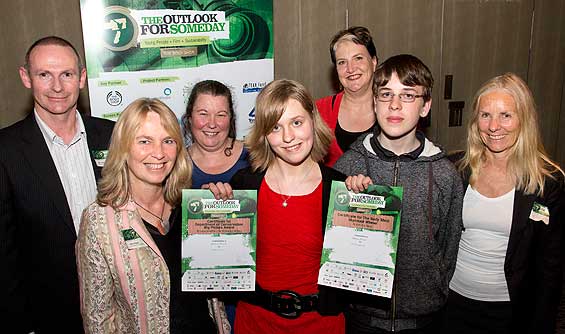 The Outlook for Someday challenge is to make a short sustainability-related film. It can be any genre, filmed with any camera and any length up to 5 minutes. Anyone up to age 24 can enter, either individually or in a team.

What is 'The Big Picture'?

The DOC sponsored Big Picture Award is a special award for a winning film focusing on one or more of DOC’s 'Big Ideas and Values'. Simply, these ideas and values express how we are all part of the natural world. We are all part of one great ecosystem. Without our fresh air, water, seas, fertile soils, forests, animals and plants we humans couldn’t survive. Every thing, even the tiniest of bugs, has a role to play, including us. What we do does make a difference.

There is a vote for Audience Favourite closing on 18 December.