Sirocco the kākāpō set to charm the Waikato

Sirocco, the official Spokesbird for Conservation and advocate for Kākāpō Recovery, is arriving in the Waikato this week for a six-week stay at Maungatautari, in Cambridge.

Sirocco, the official advocate for Kākāpō Recovery, is arriving in the Waikato this week for a six-week stay at Maungatautari, in Cambridge.

New Zealand’s most famous bird – one of just 126 kākāpō known to exist – will be ready to receive visitors from August 18, 2012.

And while Sirocco’s main mission was to raise awareness about the plight of the critically endangered species and Kākāpō Recovery’s work to save the iconic birds, his visit to Maungatautari had another purpose, Ms Vercoe Scott said. 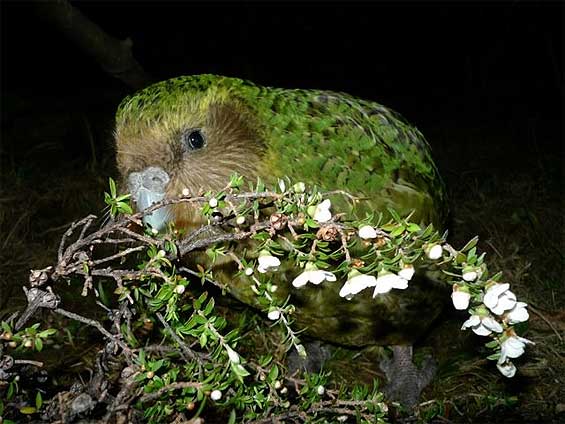 “At the moment, because of the risk predators pose to our vulnerable kākāpō population, all our birds live on offshore islands.

“But Kākāpō Recovery hopes that, one day, when the numbers have increased, we will be able to reintroduce them to the mainland. Given the size of Maungatautari, and its efforts to be predator-free, it is definitely the type of site that could suit kākāpō. Sirocco’s visit will help to highlight this potential,” she said.

Sirocco is a wild bird who lives year-round on Maud Island, in the Marlborough Sounds. He was chosen as the advocate for Kākāpō Recovery because, as a hand-reared chick, he preferred the company of people.

Ms Vercoe Scott said he provided a great opportunity for the public to engage with and learn about the special New Zealand parrot.

Sirocco will be housed in a specially-built enclosure set in a native-forest site, allowing visitors to experience kakapo in their natural environment.

“We have strict guidelines in place for his health and welfare, and we are confident Sirocco will, once again, thrive with the attention.”

First signed more than 22 years ago, the agreement is DOC’s longest running conservation partnership and has already injected more than $3.75 million towards breeding programmes, predator proof sanctuaries and innovative research for the flightless parrot.

Its long term kākāpō recovery goal is to have 150 females at three separate sites, one of which is self-sustaining.