Sea lion mum and pup on the move

A sea lion pup and its mum are being moved by the Department of Conservation (DOC) from Tomahawk Beach in Dunedin to a quieter location today.

A sea lion pup and its mum have been moved by the Department of Conservation (DOC) from Tomahawk Beach in Dunedin to a quieter location today. 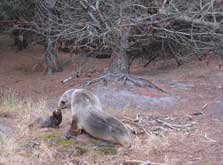 Sealion and her pup

“We decided to move Gem and her 5 day old pup because of the risk of the pup becoming injured or harassed in its current location. Gem would have soon left her pup alone on the beach to go searching for food. At that point, the pup would have become much more vulnerable,” Coastal Otago Area Manager Robin Thomas said.

Tomahawk Beach is a popular dog walking beach and a fence had been erected around the pair to protect them. Volunteers had been keeping guard during daylight hours.

The sea lions had been popular and were visited by many people, especially families. “While this has been a good learning experience, we felt that the level of interaction was not sustainable in the long-term,” Mr Thomas said. 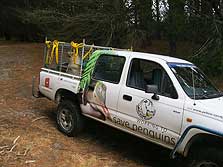 Gem was restrained and sedated by a wildlife vet, lifted onto a vehicle provided by the Yellow-eyed Penguin Trust and transported to another beach in the Dunedin area. Her pup was transported in a cage.

At the new location the pup was tagged and a DNA sample was taken. During the translocation, it was determined that the pup was a female.

The move was undertaken by DOC staff, members of the New Zealand Sea Lion Trust, researchers from Otago University and with the support of the Yellow-eyed Penguin Trust.

“There are always risks associated with handling wildlife. However the risk of leaving the pup alone on Tomahawk Beach was greater,” Mr Thomas said.

Mother and daughter bonded immediately on release at the relocation site, and at this stage, the move appears to have been successful. The pair will be monitored to make sure they remain at their new home. People are asked to keep an eye out on Tomahawk Beach in case Gem returns. 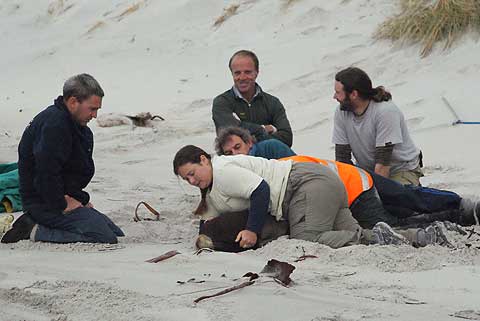