Yesterday, DOC staff did a final check of the trap network on Ulva Island in the hope of declaring the island rat free again. Unfortunately, a rat was found in one of the traps during this check. 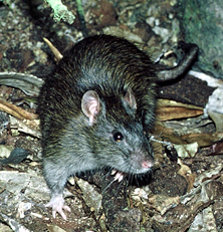 Yesterday, DOC staff did a final check of the trap network on Ulva Island in the hope of declaring the island rat free again. Unfortunately, a rat was found in one of the traps during this check.

Rats established on Ulva Island in 2010 and DOC attempted to eradicate these rats in August 2011. Since that date, extensive trapping, tracking tunnels and two checks with a rodent detecting dog have not found any sign of rats on Ulva Island. Therefore, yesterday’s capture of a male Norway rat was unexpected.

DOC’s biodiversity manager, Brent Beaven said: “the rat was caught on one of the small islets off Ulva Island. This islet has two traps on that have been checked regularly since the eradication. This suggests to us that it is likely that the eradication was successful and that this is a rat that has just recently invaded. Ulva Island is prone to reinvasion, with an average of one rat per year managing to get to the island.  If this is a “re-invader” then our biosecurity trap network has been successful in killing it on arrival.”

A sample of the rat has been sent away for genetic profiling. DOC has been building up a library of genetic profiles of rats from the 2010 Ulva invasion as well as of mainland populations surrounding Ulva Island. By comparing this latest profile against the library, we should be able to determine if the rat was a re-invader or a survivor from the eradication attempt.  Results should be available next week.

Rats get to Ulva Island either by hitching a ride on boats or swimming. Ulva is within the known swimming range of Norway rats, being 730m from the nearest mainland point (with one rock between the island and the mainland), but the frequency of this occurring is very low, otherwise they would arrive more often than they do.  Rats have been observed jumping off a boat and swimming to Ulva in the past, so we do know that boats play a contribution to rats getting to Ulva.

DOC maintains a trap network on Ulva Island to capture rats that invade before they establish a population.  This trap network has been beefed up since the 2010 invasion event.