The release of twelve rare brown teal/pāteke today was a major milestone in the ongoing work of Project Island Song to bring back the birdsong to the islands of the Bay of Islands.

The release of twelve rare brown teal/pāteke today was a major milestone in the ongoing work of Project Island Song to bring back the birdsong to the islands of the Bay of Islands.

As the rarest waterfowl species in New Zealand, with only 2,000 to 2,500 pāteke left in the wild, it is hoped the pest-free islands will act as a conservation safe haven for the duck.

Six males and six females were set free into the Entico Bay wetland, Urupukapuka Island, the largest pest-free island within Project Island Song in the eastern Bay of Islands/Ipipiri. 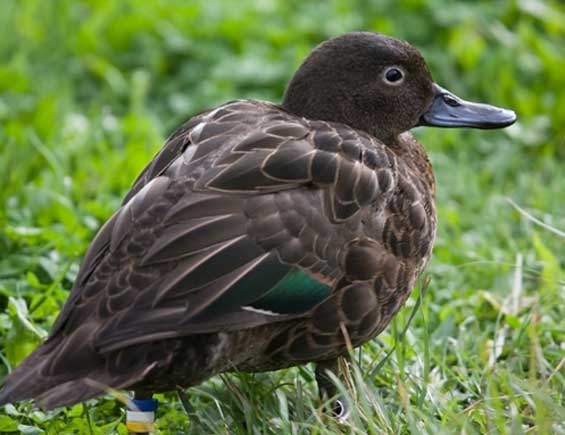 Fleur Corbett, Guardians of the Bay of Islands Chair (the local community group behind the release) says, 'This is a really exciting next step for Project Island Song. Pāteke may not be very tuneful singers but they will certainly be adding their song to the pest-free islands. We are looking forward to this release being the first of many other native birds and animals helping to make Project Island Song the best conservation project on the planet.'

Marara Te Tai Hook (Kuia, Ngati Kuta hapu) led the Ngati Kuta and Patukeha representatives at the release. Marara Hook says, 'We give thanks for the safe arrival of these taonga to the area where Nga hapu Patukeha and Ngati Kuta are the ahi kaa and kaitiaki. May these birds enjoy their new surroundings and increase in numbers so that this generation and generations to come may benefit from the splendour of their colour and calls, and add yet another dimension which their presence along the shores of Tangaroa will bring.'

The birds were flown up by Air New Zealand on the release day from the Christchurch Pāteke Breeders Group facility at Peacock Gardens in Christchurch, and then transported to the island by Fullers GreatSights vessel, Tangaroa.

Reuben Booth (Translocation Project Manager) says, 'The pāteke will be provided with supplementary food for the first three months following their release to encourage them to stay in the release area.'

The pāteke release (and the wider Project Island Song) is collaboration between Patukeha and Ngati Kuta (hapu from Rawhiti in the eastern Bay of Islands), Guardians of the Bay of Islands (a local community group), the Pāteke Recovery Group and the Department of Conservation (DOC) Bay of Islands Area Office.

Helen Ough Dealy (Biosecurity Advocacy Ranger, DOC Bay of Islands) says, 'Thanks to everyone who is already part of Project Island Song’s frontline defence and is helping keep Urupukapuka and the other islands of the eastern Bay pest-free. By checking gear, boats and equipment before landing on the pest-free islands, and reporting in any sightings of rats, mice or stoats on the 0800 DOC HOT (0800 362 468) emergency number we can all play an important part in the islands coming back to life.'