Plan of action to eradicate lagarosiphon from Lake Waikaremoana

Since a Department of Conservation contractor found an initial infestation of lagarosiphon (oxygen weed) at Te Raoa Bay, within Lake Waikaremoana, Te Urewera National Park, two further established sites have been found on the eastern side of Puketukutuku Peninsula.

DOC staff have put out signage at all boat ramps on Waikaremoana advising boat users to stay out of these infested sites.

“It is of paramount importance that all visitors to the area that are recreating on the water that they respect these restrictions” said Project Team Leader Dale Tawa.

“It only takes a small piece of this weed, as small as 2-3cm, to be broken and transferred to another site for it to become established. Unfortunately, the sites that DOC have found to date will have been created because of people inadvertently transferring the plant matter on or in their watercraft.

“The previous major infestation in Waikaremoana at Rosie Bay was successfully eradicated over several years through the careful use of a dive team hand pulling the weed, along with the use of weed matting material. These new sites will be harder to eradicate” said Mr Tawa.

Mr Tawa is confident that the Department will be able to eradicate these latest lagarosiphon incursions. “We have sought the best technical advice in the country from NIWA and during the coming winter months we will have a contractor working on the Lake using a suction dredge to start the task of removing all weed material. Effectively the suction dredging draws up all the weed matter and is carefully captured on a barge with the use of screened nets which we will then dispose of away from Waikaremoana. From here we will be sending in dive teams to remove the smaller remaining plants.

“Throughout the planning process we have valued the support of all the stakeholders with interests in Waikaremoana. These include Tangata Whenua – especially Tuhoe Te Uru Taumatua, Genesis Energy, Eastern Region Fish and Game and Hawkes Bay Regional Council.

“There is still the potential for more sites to be found with lagarosiphon on Waikaremoana as the full dive survey of the Lake edge continues, but with the continued support of all users of the area we are confident we will be able to contain and hopefully eradicate this invasive weed” said Mr Tawa.

The Department of Conservation would like to remind all recreational users of Waikaremoana that it is of paramount importance that everyone adheres to the restrictions placed on the Lake. All boat ramps and the Aniwaniwa Visitor Centre will have up to date information on areas to stay away from as the eradication gets underway.

The Department also urges users to thoroughly check their boats/canoes/kayaks for any aquatic weeds prior to taking them to Waikaremoana. The most likely places for concealed weeds are on anchor chains, warps and wells, bilges (and any other cavity that will hold moisture) also fishing gear and landing nets etc. The use of anchors should also be minimised on the lake as these may result in the further spread of Lagarosiphon around Waikaremoana. 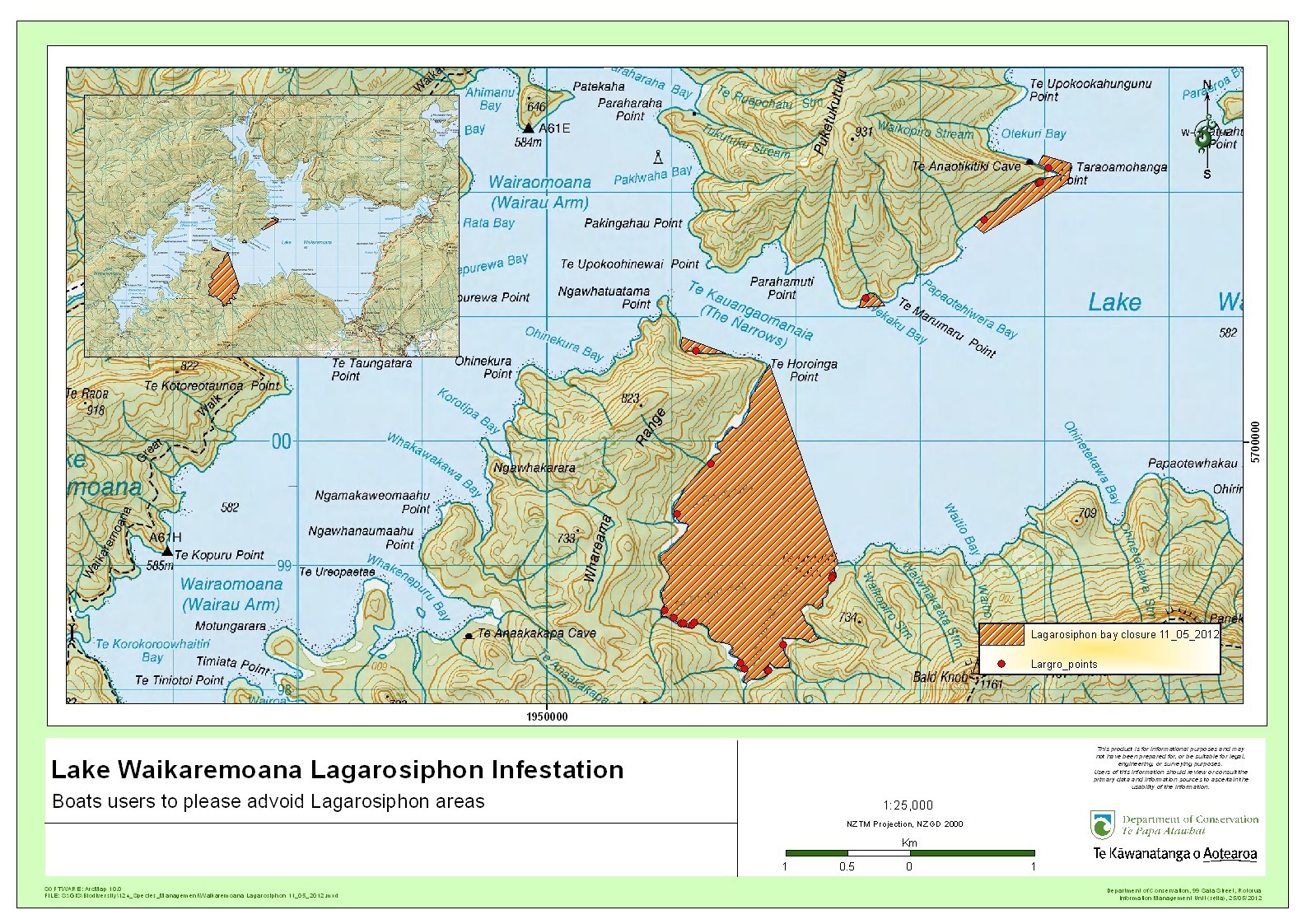 Two previous infestations of lagarosiphon have been successfully eradicated from Lake Waikaremoana; originally in 2000 – 2007 at Rosie Bay and then a smaller re-infestation in 2010.