One of New Zealand's rarest native birds, the takahē, has been released on Motutapu Island in the heart of Auckland.

One of New Zealand's rarest native birds, the takahē, has been released on Motutapu Island in the heart of Auckland.

There are only 260 takahē in the world and nine were released on Motutapu yesterday (Sunday 4 November). Motutapu is a pest free island half an hour by ferry from downtown Auckland. Takahē were once widespread throughout New Zealand but have been brought to the brink of extinction by predators, particularly stoats, and the destruction of their habitat.

The release is a major milestone in work DOC is doing in partnership with Mitre 10, aimed at securing the survival of this critically endangered native bird.

The takahē were transported almost the length of the country yesterday. Their journey began early yesterday morning at the Burwood Bush Takahē Rearing Unit near Te Anau. The birds were loaded into transportation boxes and driven to Queenstown by Department of Conservation (DOC) rangers who run the Mitre 10 Takahē Rescue programme.

At Queenstown Airport the takahē joined passengers on board a regular Air New Zealand flight to Auckland, as part of the airline's sponsorship arrangement with DOC which includes providing air transport for the department's translocation programmes.

From Auckland Airport the nine takahē travelled by road to Devonport and then by DOC boat to Motutapu. They were released into native forest planted by volunteers from the Motutapu Restoration Trust. 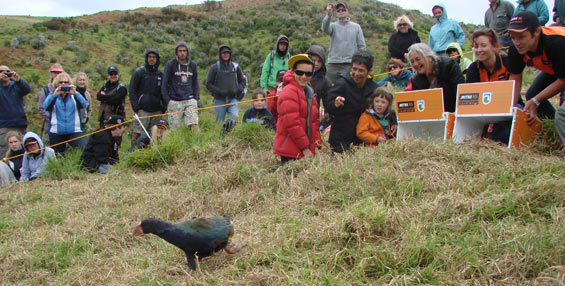 Ngāi Tai and Ngāti Paoa, alongside other iwi from within Tāmaki Makaurau, have been involved in releasing takahē onto Motutapu since it was declared pest free. They welcomed the opportunity to celebrate this work, to secure the future of this taonga, with Ngāi Tahu who travelled with the nine takahē from Fiordland.

Takahē were thought to be extinct until they were rediscovered in the Fiordland National Park 64 years ago. Dr Geoffrey Orbell rediscovered the flightless bird, deep in the Murchison Mountains, on 20 November 1948.

The work to save takahē has involved gathering 'excess' eggs from the Murchison Mountains and hatching them at the Burwood Bush unit. Chicks reared at the unit were then released onto pest free islands where they have been safe from stoats. This has led to an increase in takahē numbers.

Pest free islands where takahē have been released – Kapiti, Mana, Maud and Tiritiri Matangi – are now running out of room for takahē. A new site, free of predators and with a suitable habitat, is needed to enable the takahē population to continue growing.

Motutapu fits the bill perfectly. It and neighbouring Rangitoto – the two islands are joined by a short causeway – were declared pest free on August 27 last year. Four takahē were released on Motutapu to mark the pest free declaration.

Motutapu's grass and native forest provide a good home for takahē and the island is big enough to hold up to 20 breeding pair of takahē. This will create the largest takahē population outside Fiordland, a crucial step in securing the future of this critically endangered bird.

Mitre 10 and DOC have worked together to save takahē since 2005. Mitre 10 has provided more than half a million dollars for takahē conservation work in this period. This year DOC and Mitre 10 signed a new partnership agreement that runs until 2015 and will see Mitre 10 more than double its financial contribution to the Takahē Recovery Programme. Mitre 10 is running activities in its 100-store network over the next few months highlighting the takahē's critically endangered status. They will also give people an opportunity to lend a hand to raise money to save takahē.

"This is the largest transportation of takahē we've ever done outside Fiordland. There are only 260 takahē in the world. To move nine of these rare birds virtually the length of the country in one day was a major undertaking."

"We're doing this to help secure the survival of this special bird. The aim is to establish the second largest population of takahē outside of Fiordland at a location where we know they'll be safe."

"New Zealanders want to protect what is environmentally important, especially the distinctive native bird population, one of the things that makes New Zealand unique.

"Mitre 10's role is to help boost knowledge about the plight of the takahē and enable work to build the population and safe new homes for them. We want to encourage New Zealanders to join us in protecting an iconic part of our unique New Zealand heritage.

"Building a self-sustaining population of takahē on Motutapu will be another milestone in the work we're doing together to save these birds from extinction and to protect a part of New Zealand's natural heritage."

Up to 50 Auckland-based Mitre 10 and Mitre 10 MEGA staff members travelled to Motutapu for the release. They also helped Motutapu Restoration Trust volunteers restore the native forest on the island by planting native trees and removing weeds.

Mitre 10 has been working in partnership with DOC to save takahē since 2005, providing more than half a million dollars for this work to date. The partnership has allowed DOC to: