Date:  01 February 2012 Source:  Office of the Minister of Conservation 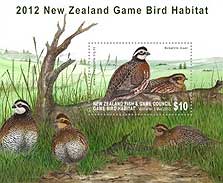 The game bird habitat stamp and art prints for 2012 were launched by Conservation Minister Kate Wilkinson today, to mark World Wetlands Day, which is held internationally on February 2 each year.

New Zealand’s game bird habitat stamps initiative is based on the successful American model where the stamps are used to endorse hunting licences with funds raised going towards waterfowl conservation projects.

Ms Wilkinson says Fish & Game NZ is one of New Zealand’s lead agencies for World Wetland Day and today she paid tribute to the organisation and hunters for the contribution they make to wetland protection.

“In most areas Fish & Game are one of the biggest players in the advocacy, protection and enhancement of wetland habitat,” she says. “For many years it has been recognised that the key to sustainable management and harvest of game birds is good habitat – look after the habitat and the birds and fish will look after themselves.”

While New Zealand conservation efforts over the last two or three decades have centred on saving rare indigenous wildlife, in recent years public sentiment has shifted towards the role wetlands and water generally play in the wider environment and how threatened these important ecosystems have become.

While wetlands are always in the natural process of evolving towards dry land, introduction of invasive plants and land development has resulted in New Zealand losing some 90% of its natural wetland cover.

“For decades now, Fish & Game NZ and hunters have been working in good faith with landowners to claw back what’s been lost – the conservation gains they’ve achieved are highly commendable.”

This year’s artwork features the bobwhite quail, a species introduced to New Zealand in the late 1800s but evident only in small numbers today. The stamp is based on artwork by Janet Marshall, a well-known New Zealand wildlife artist. As well as the stamp there is a limited edition print of the artwork and two different first day covers, being released today to celebrate this World Wetland Day. There is also a miniature sheet of stamps available. Buying any one of these is a very practical way of giving direct support to habitat protection.

The bobwhite quail on the habitat stamp for 2012 is the last species on the list of Wildlife Act 1953 Schedule 1 Wildlife declared to be game to feature on the stamp. In 2013 the Australian Bittern (although not a game bird) will feature on the stamp to reflect significant wetland wildlife and overall wetland health.

New Zealand joined what is known as the Ramsar Convention on Wetlands of International Importance in 1976. Today, World Wetland Day is celebrated on 2nd February around the globe as one of the major ways Ramsar helps promotes wetland protection throughout the world. The Ramsar World Wetlands Day theme for 2012 is Wetlands and Tourism.