Efforts to save our endangered national bird took an historic step forward with the release of the first kiwi onto Motutapu Island, in Auckland’s Hauraki Gulf Marine Park.

Five Coromandel brown kiwi were released onto the predator free island as part of a genetic diversification programme to help secure the survival of this rare type of kiwi which has a current population of around 1500.

Kiwis for kiwi patron Sir Graham Henry says he commends the work of Kiwis for kiwi and hopes New Zealanders will give it all the support they can. 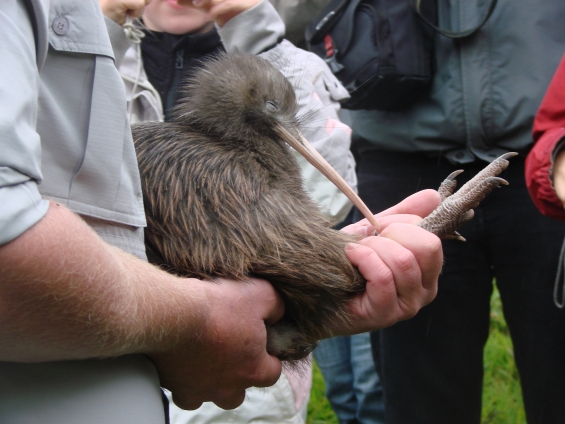 “Like many of us, I thought our national bird was so important that its population was stable, so I was  deeply concerned to find out that without help, kiwi would be virtually gone from the mainland in our lifetime.

“In recent years I have seen and felt the full force of how deeply New Zealanders value their national identity, particularly on the sports field. This organisation to save kiwi must strike the same chord of national pride, because New Zealand without kiwi is unimaginable,” says Sir Graham.

Just 25 minutes by ferry from downtown Auckland, Motutapu Island becomes the home of the closest population of wild kiwi to our largest city;  a bold landmark event that Kiwis for kiwi hopes will draw attention to the plight of this much-loved bird and reignite efforts to save it.

Kiwis for kiwi Chairman, Rob Fenwick says the release was the ideal way to launch the new organisation.

“Releasing these birds marks a new era in kiwi protection. We’re building on 21 years of experience as BNZ Save the Kiwi Trust and are more determined than ever to take kiwi from endangered to everywhere.”

The release marked the start of a programme in which up to 50 Coromandel brown kiwi will be moved from the Coromandel Peninsula to Motutapu Island over the next four to six years.

Department of Conservation (DOC) Auckland Area Manager, Jonathan Miles says its exciting adding this rare kiwi to the other endangered native birds released on Motutapu since it and neighbouring Rangitoto Island were cleared of pests such as rats, stoats and possums.

Mr Miles says the survival of the kiwi and other native birds released on Motutapu depends on keeping the island free of dogs and animal pests, in particular stoats.

“We know that 95 percent of kiwi living in unprotected areas die before they reach breeding age.”

“Everyone visiting Motutapu and Rangitoto must ensure they don’t accidentally bring mice, rats and other pests onto the islands to ensure the kiwi and other native wildlife stay safe.

“A single roaming dog can wipe out an entire kiwi population in a matter of days, which is why they are banned on Motutapu and Rangitoto,” says Mr Miles.

Motutapu Restoration Trust chair Hon Chris Fletcher says trust volunteers have worked on the island since 1994 to re-establish the islands natural and cultural landscapes. They have planted more than 400,000 native trees, creating a viable forest habitat for the return of native wildlife.

Kiwis for kiwi executive director, Michelle Impey says that the kiwi release would not have been possible without the hard work and support of the Motutapu Restoration Trust, DOC, Project Kiwi, Whenuakite Kiwi Care and iwi in Auckland and the Coromandel.

“Without the volunteers who’ve collected seeds, planted native trees and controlled weeds we would not have suitable habitat to release kiwi on Motutapu. And without the work of projects such as Project Kiwi, which began 16 years ago and was the first community programme in the country to protect kiwi we, we wouldn’t have birds to release on the island.”

“Establishing a new population of Coromandel brown kiwi on Motutapu is the latest step in a long journey back from the brink for these birds. They owe their survival to the combined effort of more than 12 community kiwi groups, landowners, private companies and DOC,” says Ms Impey.

“The historic release of Coromandel brown kiwi on Motutapu has the full support of the tangata whenua of the Coromandel and Auckland regions. Iwi involved welcome the transfer of this taonga to Motutapu as a symbol of the whakapapa connections between Hauraki and Tamaki Makaurau,” says DOC Auckland Area Manager Jonathan Miles

Anyone wishing to help save kiwi can donate $3 to Kiwis for kiwi by texting KIWI to 2454.

Watch the Kiwis for Kiwi release on Motutapu Island video.

Kiwis for KiwiTM is the trading name of The Kiwi Trust. It is a new independent trust, carrying on more than two decades of dedicated work by BNZ Save the Kiwi Trust, to help protect kiwi and the places they live. Thousands of New Zealanders have donated to this cause. Kiwis for kiwi raises and distributes funds to community, DOC and volunteer groups helping save kiwi throughout the country.  Kiwis for kiwi brings with it expertise, skills, resources and connections built over the past 21 years as BNZ Save the Kiwi Trust creating an excellent platform with a vision to take kiwi from endangered to everywhere.

The Motutapu Restoration Trust was established in 1994 to restore the ‘natural and cultural landscapes’ of Motutapu through the active participation of volunteers.  At around 160 million years old, Motutapu is one of the oldest landforms of New Zealand, which has prompted the Trust’s by line of ‘breathing new life into an ancient landform’.

The Trust seeks to restore a natural landscape similar to that which arose out of the ashes of the Rangitoto eruption some 600 years ago. It runs a year round volunteer programme involving the community in seed collection, nursery work, tree planting and weed control. Regular volunteer days take place on the first, third and fifth Sunday of each month, together with mid-week volunteer days, throughout the year. The Trust welcomes new volunteers keen to help ‘breathe new life into an ancient landform’.

Coromandel brown kiwi have been identified as genetically different to all other brown kiwi. Establishing a breeding population on pest free Motutapu will provide long term security for these rare birds by increasing their number and mixing their genes. This genetic diversification will be achieved by moving Coromandel brown kiwi from all over the peninsula to Motutapu producing genetically robust birds which could be returned to the Coromandel in the future.

Coromandel brown kiwi are increasing in number thanks to 10 years of successful recovery work involving community-led kiwi conservation groups and DOC. A 1993 survey revealed a widespread but fragmented Coromandel brown kiwi population with significant hot spots in the northern part of the Coromandel. DOC, supported by members of the community decided to take action. They set up kiwi recovery projects focusing initially on controlling stoats and other kiwi predators. Moehau Kiwi Sanctuary led the way. They monitored the survival rate of kiwi chicks in areas where stoats, weasels and other mustelid species were controlled. After eight years of surveying they found that 60% of kiwi chicks survived in areas where predators were controlled compared to a survival rate of less than 5% where there was no predator control.

View more information on the work being undertaken by the Coromandel kiwi community groups on the Kiwis for Kiwi website.

Treasure Islands is a biosecurity programme run by DOC and Auckland Council. It protects islands in the Hauraki Gulf Marine Park, from animal and plant pests that can decimate native wildlife and plants.  Its prime focus is ensuring that islands cleared of pests - such as rats, mice, stoats and possums – remain free of these pests.

Fullers have graciously provided transport to Motutapu for this event free of charge.