A landmark year for the Whangarei Kiwi Sanctuary has seen the 100th kiwi make the round trip from egg to release and back into the wild, as part of the highly successful BNZ Operation Nest Egg programme.

A landmark year for the Whangarei Kiwi Sanctuary has seen the 100th kiwi make the round trip from egg to release and back into the wild, as part of the highly successful BNZ Operation Nest Egg programme.

Within the Whangarei Kiwi Sanctuary, eggs are collected from the nests of wild birds mid way through a sizeable 75 day kiwi incubation period. From here, they are taken to Auckland Zoo for incubation and hatching, before transfer onto predator free Motuora Island in the Hauraki Gulf. 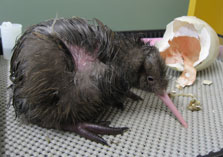 Chicks are left on the island to grow to 1200 g. At this weight, they are able to withstand stoat and cat attacks, and take their next step - a move back to their wild origins within the Whangarei Kiwi Sanctuary.

DOC staff along with specially trained kiwi dogs track and capture the birds on Motuora. The kiwi are captured, weighed, health checked, boxed, transferred by ferry to the mainland, and then driven 120 km north ready for release.

"The kiwi round up and capture on Motuora spans several long days and nights finishing at around 2 am each morning,” says DOC kiwi ranger Paul Cornille.

Mr Cornille said it was especially rewarding to have this season's capture include the 100th kiwi to complete the circle from egg to sub-adult and return to the safety of the Whangarei Kiwi Sanctuary.

"This is a success story for conservation made possible by all those members of the general public and private land owners who have committed to saving kiwi” say Mr Cornille.

Along with the 100th juvenile being removed from Motuora, this year has also seen another milestone with the 250th Zoo hatched kiwi chick now placed on the island.

Auckland Zoo staff and a film crew have followed several kiwi from egg collection and hatching through to the initial release on Motuora, their recapture, and final release in Tutukaka. Fifteen birds were released at this Whangarei Kiwi Sanctuary site, and a further 14 birds on private land at Purua and Riponui.

The Whangarei Kiwi Sanctuary is made up of fragmented forest, farmland patches, DOC reserves and private bush spread throughout Purua, Rarewarewa, Riponui, Motatau and through to Whangaruru, Mimiwhangata, Ngunguru and Whangarei Heads.

Mr Cornille says that monitoring of the recent released bird's transmitters shows they are spreading out and doing well. But he warns that the number one limiting factor for adult kiwi survival and kiwi population stability in Northland is uncontrolled dogs.

"These kiwi will be able to fend off stoats and cats but are defenceless against free roaming dogs" says Mr Cornille.

He'd like to see dogs under control at all times and urges the public to contact ENL (Whangarei District Council Animal Management) +64 9 438 7513 to report wandering dogs, and their local DOC office for information on kiwi aversion training days for dogs.