The most successful kiwi breeding season in the history of New Zealand’s national wildlife centre has ended on an extraordinary note with the surprise hatching of a white kiwi chick.

The most successful kiwi breeding season in the history of New Zealand’s national wildlife centre has ended on an extraordinary note with the surprise hatching of a white kiwi chick.

Hatched on 1 May, the chick was the thirteenth of fourteen kiwis successfully hatched at Pukaha Mount Bruce this breeding season, by far the most successful since 2003 when kiwi were reintroduced into the wild there.

Named Manukura by local iwi Rangitane o Wairarapa, the chick is not an albino but the rare progeny of kiwi that were transferred to Pukaha from Hauturu/Little Barrier Island last year. 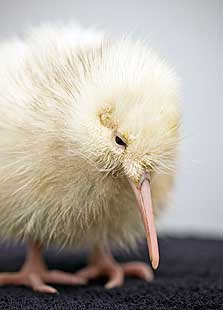 Manukura the white kiwi chick“As far as we know, this is the first all-white chick to be hatched in captivity,” said Pukaha Mount Bruce Board chairman, Bob Francis. “The intention of the transfer was to increase the kiwi gene pool at Pukaha and grow the population in the long-term.  The kiwi population on Little Barrier Island hasbirds with white markings and some white kiwi, but this was still a big surprise.” No white kiwi were brought to Pukaha.

“This first breeding season involving the Little Barrier kiwi has far exceeded expectations,” Bob Francis said. “Faster breeding is exactly what was intended by the transfer, but were blown away by the number of chicks produced so quickly.” Compared to this season’s 14 chicks, between 2005 and 2010 a total of 10 chicks were hatched and returned to the forest. 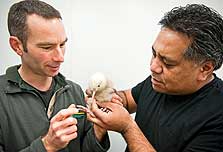 Rangitane chief executive and Pukaha board member, Jason Kerehi, said tribal elders saw the white chick as a ‘tohu’ or ‘sign’ of new beginnings. “Every now and then something extraordinary comes along to remind you of how special life is.  While we’re celebrating all 14 kiwi hatched this year, Manukura is a very special gift.”

Meaning ‘of chiefly status’ the Maori name Manukura also joins the Rangitane people with Ngati Manuhiri, the tribe from Little Barrier Island which helped transfer the 30 kiwi to Pukaha. ‘Kurahaupo’ was a Rangitane waka or canoe. ‘Manu’ means something of high rank and also a bird. Kura means ‘precious’ and also ‘feather’.

The chick is being hand-reared in Pukaha Mount Bruce’s new kiwi nursery, part of a recent $1.4 million upgrade of the nocturnal house. Manukura will remain in the nursery until the end of May where visitors can view it in its nocturnal brooder box andbeing weighed daily at 2.00 pm. 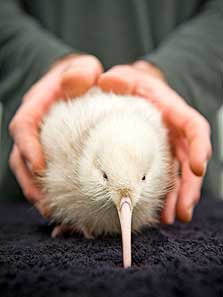 The white chick will then remain in captivity with other chicks at Pukaha for at least four to six months where, subject to its behaviour and welfare, it will be able to be viewed several times a week while being weighed. When it is old enough to protect itself, it could potentially be released into the sanctuary.

However, Department of Conservation (DOC) rangers, who manage the kiwi programme at Pukaha, will ensure the best interests of the bird remain a priority.

“A white kiwi might really stand out making it more vulnerable,” said DOC area manager Chris Lester. We want to ensure that as many people as possible get a chance to see it, and that we keep it as safe as possible. We also recognise the need to take everything into account when deciding how best to keep Manukura safe.”

Fertile kiwi eggs are retrieved from the 940-hectare native forest and incubated in the kiwi house until they hatch.

Two of this season’s chicks have already been released into the Pukaha forest and 12 chicks at various stages of growth are being held either in the kiwi house nursery or in a predator-proof outdoor enclosure.  They will be released when they weigh approximately one kilogram and are large enough to defend themselves in the forest.