Whales wash up at Waitotara beach

In the early hours of Saturday morning a huge whale thought to be a pygmy blue whale stranded at Waiinu beach, Waitotara on the South Taranaki Coast.

In the early hours of Saturday morning a huge whale thought to be a pygmy blue whale stranded at Waiinu beach, Waitotara on the South Taranaki Coast. The whale, measuring 22.5 metres in length and weighing approximately 60 - 80 tonnes is one of the largest to wash up on the coast in decades.

Locals either walked or made their way along the beach in 4WD vehicles yesterday to get up close to the whale and were in awe of its size. 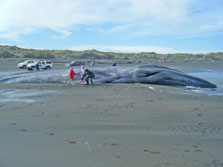 Locals get up close to the pygmy blue whale

Pygmy blue’s tend to be solitary although groups of animals are found in areas of high productivity particularly in the northern Indian Ocean, off Sri Lanka and southern and western Australia. Blue whales are lunge feeders that rely on large concentrations of krill.

In addition to this another whale washed up this morning a little further south of the pygmy blue and was identified as a pygmy sperm whale. It measured 3 metres in length and is one of the smaller of the whale species. This whale will likely be buried later on today or early tomorrow. It is not known how either whale died. 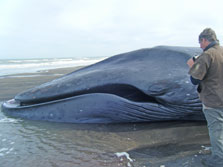 The 22 metre pygmy blue whale will be buried today also using two diggers. Local iwi Ngaa Rauru were on site yesterday working with DOC in the decision making process in regard to burial and DNA sampling. “The appropriate tikanga (protocols) has been followed during the burial process including a karakia (prayer)” said Darren Ratana, Ngaa Rauru iwi Chairperson.

Whales are taonga (treasures) and hold great importance to Ngaa Rauru. Ngaa Rauru have been actively involved with DOC around whale standings’ along the South Taranaki coast.