Conservation Week kicked off in Wellington at the Waitangi Park Weed Swap event on Sunday 11 September, with over 400 native plants given away in exchange for garden weeds.

Conservation Week kicked off in Wellington at the Waitangi Park Weed Swap event on Sunday 11 September, with over 400 native plants given away in exchange for garden weeds.

“Despite the rain we had a great turn out for this popular family event, which promotes the need for weed eradication and educates young and old on how to attract native wildlife to gardens,” Department of Conservation community relations ranger Kirstie Knowles said. 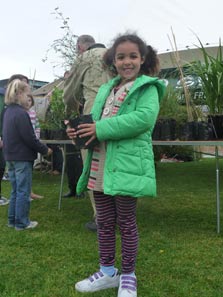 Co-hosted by the Wellington City Council and supported by Greater Wellington Regional Council, Kiwi Plants, Forest & Bird and the Kiwi Conservation Club, the Weed Swap was a chance for all of us to talk to keen gardeners on the perils of garden escapees, she said.

“Many exotic plants can cause a real problem once liberated.  This can occur because people choose to dump their weeds illegally rather than take them to the landfill. Or seeds get distributed by birds and winds, and if not kept under control in a garden, will smother and take over some of our most special places.”

For the first time in a few years, no new records of the regional council’s total control plants were brought in.

“While we’re still on the lookout for these pesky pest plants this is good news,” Knowles said.

The most common weeds brought in by gardeners were wandering willie (Tradescantia fluminensis), pellitory of the wall (Parietaria judaica) and puha (Sonchus oleraceus). Some particularly bad weeds brought in were wild ginger, English ivy, Cape ivy, Japanese honeysuckle and agapanthus.

“Once in the wild these pest plants all smother the ground and prevent the establishment of native seedlings,” said Knowles.

There are now more exotic plant species wild in New Zealand than there are natives, with at least 20 new species recorded wild each year. Weeds are estimated at causing a loss of native biodiversity of the value of $4.42 billion.