Rare Waiohine short-tailed bats at the centre of a ground-breaking conservation project are among the native animals on show at the new Te Wao Nui New Zealand precinct at Auckland Zoo.

Rare Waiohine short-tailed bats at the centre of a ground-breaking conservation project are among the native animals on show at the new Te Wao Nui New Zealand precinct at Auckland Zoo.

The progeny of bats from a genetically rare and endangered Tararua Forest Park population were historically part of a plan to establish a new population on Kapiti Island - the most ambitious species transfer ever undertaken anywhere in the world for native bats.

During 2005 and 2006, the Department of Conservation (DOC) took pregnant bats from the Waiohine Valley to the National Wildlife Centre at Pukaha Mount Bruce until they had given birth and weaned their pups. The mothers were returned to Waiohine Valley, and the pups were taken to Kapiti Island, held in captivity for several months, and then released on the island.

While the transfer was successful and the bats stayed on Kapiti, they developed a dermatitis infection on their ears which was unable to be treated in the wild. If left to their own devices, they would probably have died as they could no longer properly echo-locate (a bat's sonar system for navigating and catching prey).  The 12 bats were recaptured and handed over to the care of Auckland Zoo and Auckland iwi Ngati Whatua by Wairarapa DOC staff and iwi partners Kahungunu. 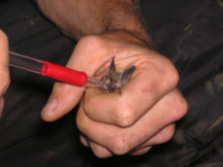 DOC Wairarapa Area biodiversity ranger Phil Brady, who was involved in the transfer and continues to protect the Waiohine bats in the wild, attended the ceremony on 10 September to welcome the bats to Te Wao Nui.

”I’m very proud that the bats in Te Wao Nui are Wairarapa bats. We appreciate the effort that has gone into their care and management at the zoo, into telling the story, and giving them pride of place in The Night (Te Pō) display.”

Their “story” goes back 90,000 years when their population was isolated from other bat populations by volcanic activity, and glaciation. The short-tailed bat was thought to have disappeared from the Tararua area until a small population was discovered in the Deep Creek area of Waiohine Valley in 1999. The population, limited to about 300 bats over 300 ha, is the only population of short-tailed bats in the southern North Island, and under threat from rats and stoats.

For the last three years Phil Brady and a small team of volunteers have spent summers undertaking pest control around the nursery roosts to improve survival of the juveniles at their most risky period for predation.  Further transfers from this population are unlikely, but the lessons learned can be applied to projects here and elsewhere in the world.

Auckland Zoo works with DOC and other conservation partners on a range of species, returning animals to the wild and monitoring and protecting wild populations. DOC is looking forward to the Waiohine bats partnership developing further to meet the challenges ahead for the conservation of short-tailed bats.

Te Wao Nui features 60 NZ native animal species (over 350 animals) many of which are new or have never been displayed including the Waiohine short-tailed bat, Campbell Island teal and Otago skink. ENDS