"Velvet the travelling tuna tapestry" has been making her way around the far north and has arrived in Gisborne.

“Velvet the travelling tuna tapestry” has been making her way around the far north and has now arrived in Gisborne. Enviroschools and Department of Conservation (DOC) are encouraging Gisborne and East Coast schools to join the Tairawhiti leg of the tour.

Created by Environmental Educator, Stephanie Jo Bowman, the Tuna Tapestry Tour, is a fun and creative way to educate young people about the plight of the longfin eel. The project encourages schools and groups to design a tapestry piece, depicting healthy freshwater and marine environments, to add to "Velvet the travelling tuna".

On completion of the tour, all pieces from participating schools and groups will be joined together and the final tuna tapestry will be displayed at Te Papa in Wellington. 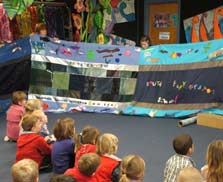 “These threatened and important top predators are found nowhere else in the world and are a crucial part of this country’s cultural history.”

Longfin eels are one of the largest eels in the world. They can live up to 80 years, upon maturity they head out to sea near Tonga to breed, and then die. Factors such as habitat destruction and commercial fishing have affected the survival of the eel so much so that the Longfin is in decline on the verge of endangered, soon to join the ranks of the Kiwi and the Kakapo.

“They don’t have that “cute and fuzzy” appeal but they are fascinating creatures nevertheless that need our help. We all have stories of how plentiful our waterways used to be. Those stories are hard to come by these days" says Department of Conservation Community Relations Ranger Trudi Ngawhare.

“The aim of the project is to get people to think about what we can do ourselves to help the survival of the native eel. One way is to educate. Already local hunting and fishing clubs have shown their support by removing eel as trophy species from their competitions in favour of introduced pest species. Now we have our children learning and participating in the Tuna Tapestry Tour to teach others about how special the Longfin eel is.”

“Velvet” is due to move on to Taihape in September. Although Velvet is here for a short time, schools and groups are still able to create a section of tapestry and send to organisers in time for the final display at Te Papa Museum.