Seaweek 2011 will take the Far North on a photographic journey from oceans to icebergs with marine photographer, Dr Roger Grace. He took time out of his preparations to answer a few questions about his work and what sort of images people can expect to see.

Seaweek 2011 will take the Far North on a photographic journey from oceans to icebergs with marine photographer, Dr Roger Grace. 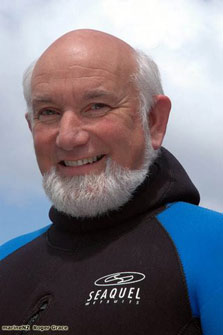 Seaweek 2011 is about to hit the Far North with a roadshow entitled ‘Our Oceans in focus – a photographic insight into the marine world’. The show features images gathered over 20 years by Greenpeace photographer and marine biologist Dr Roger Grace.

Roger is a familiar face to many in the Far North through his work and for bringing a local fisheries perspective to the very successful ‘End of the Line’ film screenings last year.

Roger took time out of his preparations to answer a few questions about his work and what sort of images people can expect to see.

How did you become a Greenpeace photographer?

Before officially starting, I’d previously been asked by Greenpeace for images as I was already known as an underwater photographer. Then in 1990, Greenpeace asked me to join their new ship on a drift net campaign in the Tasman Sea photographing animals stuck in nets, so I thought how could I refuse?

What sort of campaigns have you been involved in?

Over the 20 years I worked with Greenpeace, I averaged around 1-2 major trips each year. I’ve been to Antarctica 5 times, done long oceanic voyages on the Rainbow Warrior covering a range of fishing issues including blue-fin tuna, and long-lining. I’ve done a few Climate Change and oil campaigns. And, of course, whaling and deep sea trawling.

I spent three weeks photographing fishing villages along the South-east coast of India once thanks to the nightmare Indian bureaucracy stopping me from boarding the ship. That was quite surreal as a lot of those villages were lost or suffered damage in the Boxing Day tsunami of 2004 just two months after I was there.

Any particular ‘stand out’ moments?

Quite a few! I remember staring down the flare gun of an irate drift net fisherman in the Arafura Sea (between Australia and Papua New Guinea). He didn’t shoot but it was heart-pounding at the time!

One of the neatest things was when I was watching a purse seiner hauling in a net of tuna in the Pacific. Eight false killer whales were hanging around, obviously aware of what was happening, because as the nets tightened and squeezed the fish, the whales would carefully pluck out individual fish that had managed to wiggle half out of the net. I was also lucky enough to have a close encounter with a marlin when a 2.5-metre long stripy swam past me while diving in the Pacific. It was the most incredibly rich and vibrant electric purple colour.

What sort of images can people expect to see at your show?

A mixture of ‘shock horror’ and pretties. Basically a selection from the campaigns. There will be top side and underwater images – marine junk and pretty things. Some Antarctic scenes and penguins. Actually, the shock horror won’t be too bad- it will be safe to bring the kids along!

Why are you doing this show?

To give people a history of the main marine issues Greenpeace has dealt with over the years. It's also about showing  people the impacts humans are having on our oceans, as well as how some of it can be corrected-so there’s a positive message in there!

I hope it will end up with people feeling more positive about looking after our seas and the little bit we can all do to help.

Dr Grace has three shows in the Far North:

All shows are entry by gold coin donation towards Far North Whale Rescue. Contact the Department of Conservation or Far North Environment Centre for more information.