A report of a seal pup in Hawke's Bay biting a member of the public, who thought they were helping it, has again highlighted the need to be careful with wild animals.

A report of a seal pup in Hawke's Bay biting a member of the public, who thought they were helping it, has again highlighted the need to be careful with wild animals.

“Seals usually need rest, not rescuing” is the plea from the Department of Conservation in response to the seasonal spate of calls about “sick and sad” seals on Hawke’s Bay beaches.

It is common between July and October for seal pups to come ashore to rest, particularly after a storm.  This is because they have been weaned and are learning to make their own way in the world.  They come ashore to rest before they head out to sea again for food. 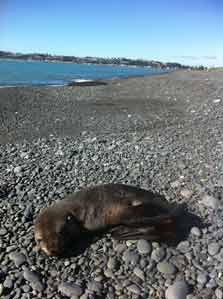 Pups and young adults can look scrawny because they are learning to hunt and adapt to the big wide world.

“Regurgitating, sneezing and coughing are common seal habits, probably to get rid of undigested food and, as they don’t have tear ducts, their weepy eyes are a natural mechanism to protect their eyes”, says DOC biodiversity programme manager Bryan Welch.

While they might look cute and harmless, appearances can be deceiving.  Seals are wild animals and will defend their territory aggressively.  They carry infectious diseases and their teeth can inflict serious injuries.  You should keep at least 20 metres away and not get between the seal and its escape route to the sea.

Please be extra vigilant to keep dogs under control.  Seals can move surprisingly quickly on land and adult seals are capable of inflicting serious injuries to dogs.

DOC works on a minimal intervention policy, only intervening if the seal is seriously injured, being harassed by dogs, entangled in something like net or rope or is in a dangerous place such as on or near a road.  In these situations, DOC rangers will attend and take necessary action.  If OK, DOC will usually leave a sign on the beach that indicates a ranger has been to check the seal out.  Otherwise it is survival of the fittest – natural law. 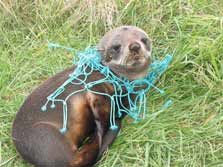 A seal with plastic netting around its neck in Gisborne. This one does need rescuing

If you find a seal that is severely injured, or entangled in marine debris, or being harassed by people or dogs, call the DOC HOTline 0800 362 468.

Otherwise the following rules for observing seals are designed to protect both the seal and the observers:

“By all means enjoy the seals but please observe the guidelines to ensure the animals and your own safety,” Bryan Welch said.