Sailors Grave (Te Karo) was the site of a nationally significant find of a rare spectacled porpoise.

Sailors Grave (Te Karo) was the site of a nationally significant find of a rare spectacled porpoise. Department of Conservation (DOC) staff discovered the rarity of the find after a local resident saw the marine mammal carcass floating close to shore.

‘This is the 5th record of an animal to strand on New Zealand's shores; it is the only record from the North Island. There was a live stranding in the Catlins in 1996,’ says Te Papa’s Collection Manager Marine Mammals Anton van Heldon. ‘If the measurements are correct then it is the biggest recorded for its species.’ 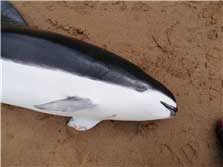 ‘This is a novel event for DOC in the Hauraki Area, indeed New Zealand; it’s safe to say that staff were surprised and excited with the find,’ DOC Biodiversity Assets Manager Bridget Baynes explains. ‘Little is known about the spectacled porpoise, so this is a rare and scientifically valuable specimen.’

The porpoise is believed to be an adult female measuring 2.3 metres. The teeth were worn down to the gums, and a Cookie Cutter shark had taken a couple of plugs from the side of the porpoise. This is not considered to be the cause of death and there were no other visible injuries. Actual cause of death will not be known until the results of the Massey University necropsy report.

The Spectacled Porpoise is a robust creature with a small head and no beak. Spectacled porpoises have distinctive black and white markings - black above and white underneath. They have black eyes with white rings or spectacles, and a white stripe on the upper surface of the tail. They have a large rounded dorsal fin.