A colony of rare native bats has been discovered beside the Kepler Track Great Walk, Fiordland, thanks to a project supported by Distinction Hotel and the Fiordland Conservation Trust.

A colony of rare native bats has been discovered beside the Kepler Track Great Walk, thanks to a project supported by Distinction Hotel and the Fiordland Conservation Trust. Rangers from the Department of Conservation (DOC) made the remarkable discovery in mid-December after the detection of bats on automatic recorders led them to discover just the second known colony of long-tailed bats in Fiordland. 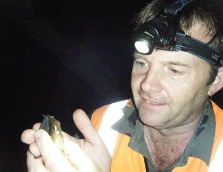 Long and short-tailed bats are New Zealand’s only remaining land mammals and are in desperate need of protection with both species now ranked as nationally critical and nationally endangered respectively. This discovery of a previously unknown long-tailed bat colony in the Iris Burn Valley is a significant achievement for bat conservation, and will hopefully allow protection work to be undertaken to preserve this colony so close to Te Anau.

DOC Biodiversity Ranger Jo Whitehead said unlike birds, once these bats have gone from the Kepler Mountains they are unlikely to ever return as we don’t yet have the techniques to transfer bat populations. Native bats are decimated by rats in plague years and are particularly vulnerable while breeding in their roost trees over summer. Five maternity roost trees have so far been discovered in the Iris Burn Valley, upstream of Rocky Point and less than 500m from the Kepler Track Great Walk.

The discovery came about as a result of Distinction Hotels and the Fiordland Conservation Trust supporting a one month research project to track down the maternity roosts of native bats that had been sighted around the Te Anau township in recent years.

The project fits alongside the Kepler Backyard Birdsong Project (partially funded by the Kids Restore/Air New Zealand Environmental Trust) that aims to bring back the birds, and now hopefully the bats, to the Kepler Peninsula. Funding is still being sought for pest control to protect some areas of the Kepler Peninsula, including the Iris Burn valley that is now home to long-tailed and possibly short-tailed bats.

Thanks to visiting students from the North Island

Interestingly, the discovery may not have been made if it wasn’t for the work of twenty Polytechnic students visiting from the North Island. During the first two weeks of December, DOC rangers focused their research around the outlet to Lake Te Anau and along the Upper Waiau River where bat activity had previously been recorded on automatic detectors. Specially designed harp traps were erected around these bat feeding grounds to try and catch one of these elusive native mammals, but after two weeks of late nights and early mornings no bats were caught.

When staff received news that hundreds of long-tailed bat passes had been recorded on automatic bat detectors in the Iris Burn Valley by the Polytechnic students from Tauranga, they were quick to switch focus and erected six harp traps in the valley the following week.

On the first night four bats were caught, and to the excitement of staff, two were breeding females. “We attached a tiny radio transmitter to each female so we could track them down to their maternity roost trees” said DOC ranger Warren Simpson.  “This is when we discovered they were roosting so close to the Kepler Track” he said.

Estimating the size of the colony

Following the discovery of the roost trees in the Iris Burn valley the size of the long-tailed bat colony was estimated by watching the bats leave their roost in the evening. “At least 60 bats have been seen so far, but the population may be closer to 100” said Mr Simpson. “The first bats left the tree soon after 9pm when it was still quite light but most flew out around 10.20pm under the cover of darkness”.

This information and data from automatic bat detectors (that pick up the echo location of bats while they are feeding) has DOC staff suspecting that the bats sighted around the Te Anau township may well be the long-tailed bats from the Iris Burn Valley, travelling across Lake Manapouri and up the Waiau River to feed around Te Anau. Further research will be required to confirm this but it seems likely as bats will commonly travel 20 km in an evening to feed on insects, especially along their favoured waterways. Scientists have tracked bats from the Eglinton Valley (the site of Fiordland’s only other known colonies of long and short-tailed bats) feeding 30 km away at the mouth of the Eglinton River.