Joni Mitchell sang of paving paradise to create a parking lot… but a new car park at the Castlepoint Scenic Reserve has enhanced the natural attributes of this slice of kiwi “paradise”.

Joni Mitchell sang of paving paradise to create a parking lot… but a new car park at the Castlepoint Scenic Reserve in Wairarapa has enhanced the natural attributes of this slice of  “paradise”.

A collaborative project to replace an old and inefficient car park has resulted not only in a better, more accessible car park, but the restoration of the adjacent sand dunes.

The opening ceremony on Saturday 3 September was an opportunity to acknowledge the input of those who have been involved since 2009, when planning and consultation began to build the replacement car park.

Advice was sought from Te Hika a Papauma o Wairarapa, the Castlepoint Residents and Ratepayers Association, the Historic Places Trust and Saint Peters by the Sea.  The Department of Conservation and the Masterton District Council partnered financially to support the $213,288.69 project, undertaken by local firm Bruce Buchanan Ltd. 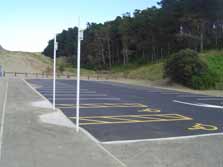 The opening ceremony began with a blessing by Robin Putungaroa from Te Hika a Papauma o Wairarapa followed by a speech by Masterton Mayor Garry Daniell.

“Not only has the old and inefficient car park been renovated, but the adjoining dunes have been restored,” said DOC Wairarapa Area manager Chris Lester.

The invasive weed species marrum grass has been replaced with the native dune species Spinifex and pingao, more than 5000 of which were planted with the help of the Castlepoint Residents and Ratepayers Association.

The car park, which provides safe entry and exit for cars and pedestrians, incorporates 32 standard parks, two disabled spaces and room for a bus.

The car park complements the recent upgrade of the concrete path to the light house. DOC is also improving the picturesque Deliverance Cove track at Castlepoint this financial year.

The Castlepoint Scenic Reserve is popular with people who come to surf, fish, swim, walk and savour the spectacular scenery, particularly during summer. ENDS