Redfin bullies, New Zealand’s most colourful native fish, and koura, or native crayfish, were released into Home Bay Stream on Motutapu on 26 November 2011. The release was led by DOC with support from the Motutapu Restoration Trust, Ngai Tai and the Mahurangi Technical Institute.

The release is part of DOC’s programme to move at risk native wildlife onto Motutapu and neighbouring Rangitoto Island after eradicating animal pests including rats, stoats and possums from the islands. 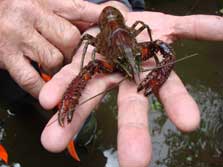 “It’s great to see two native fish whose numbers are falling, joining the two species of threatened birds we released on pest free Motutapu three months ago,” says DOC ranger Callum Bourke who led the release of the freshwater species.

“Nationally koura and red fin bully populations are declining due to habitat loss, loss of water quality and other factors,” says Callum Bourke.

“Motutapu provides them with a safe refuge as their habitat there is being restored, the water quality is improving and there are no stock grazing the banks of their new home.”

“Volunteers from the Motutapu Restoration Trust have done a great job restoring the native bush providing essential shade and cover for the koura and redfin bullies.”

Callum Bourke believes it’s the first time there’s been a translocation of redfin bullies in the wild. “So it will be exciting to see if they’ll establish a self-sustaining population on Motutapu”.

He says koura may have lived on Motutapu in the distant past. “Its possible koura were once on the island but disappeared following a catastrophic event such as the Rangitoto eruption 700 years ago.”

Some of the koura and redfin bullies released on Motutapu were rescued from a section of stream that was removed to make way for a large pipeline.

“DOC was alerted to their fate by Ngai Tai and managed to retrieve some redfin bullies and koura before they were killed or displaced by the pipeline work. It’s fantastic they now have a safe new home on Motutapu,” says Callum Bourke. 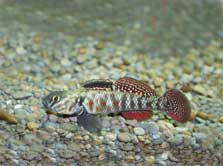 Redfin bully, Motutapu Island“A further release of koura and redfin bullies will be made in 12 months. It’s hoped both species will build self-sustaining populations on the island,” says Callum Bourke.

A total of 120 koura and 120 redfin bullies have been released on Motutapu. They have come from the Mahurangi Technical Institute in Warkworth which specialises in the capture and breeding of freshwater fish.

There are four other species of freshwater fish on Motutapu - long fin and short fin eels and two native whitebait species, inanga and banded kökopu.

Koura are native freshwater crayfish that live in streams, ponds, lakes and swamps. They are scavengers that eat leaves and small insects that float by or settle on the bottom of a stream. They also filter fine sediments improving conditions for other organisms.

Koura act as an indicator species, signalling to scientists when conditions have become unhealthy for a range of organisms in their habitat. If koura are living in a stream it’s a good sign that the stream is clean.

They are also renown for their ability to climb up streams. In research experiments redfin bullies have swum up ramps with 15-degree slopes and climbed slopes of 30 and 45 degrees. They use a breast-stroke movement with their large pectoral fins to grip the surface they’re climbing.

There are seven species of bullies in New Zealand.