The road to Milford Sound, which travels through the Eglinton Valley, is now one of the most accessible places in the country to see and hear mohua/yellowhead.

The road to Milford Sound, which travels through the Eglinton Valley, is now one of the most accessible places in the country to see and hear mohua/yellowhead.

Thanks to the efforts of the Department of Conservation and with funding from Nigel Babbage of the Mohua Charitable Trust, the transfer of 69 birds in October last year has proven highly successful. The results are just in from the monitoring team and they are thrilled with how the recent breeding season has gone. 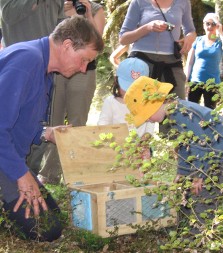 Jason van de Wetering from DOC's Research and Development Group said that at least thirty four of the released birds stayed and settled in the valley, and as a result, sixty two chicks successfully fledged.

“Thanks to the transfer of birds in October and the successful breeding season over summer there are now at least 114 mohua living in the valley at last count, with one late nest still to hatch,” Mr van de Wetering said.

The endangered mohua were transferred from Chalky Island on the Fiordland coast into the Eglinton Valley and were released near Knobs Flat - a popular stopping place on the journey to Milford.

Prior to the release in October, DOC staff knew of only eighteen individual mohua living in the valley. Their numbers had plummeted from several hundred down to just a handful following a prolonged rat and stoat plague that hit the area between 1999 and 2001. The predator plague was driven by two heavy beech seeding years or 'mast' events that allowed rodent and then stoat numbers to climb well above normal levels. At the time no rat control was in place to prevent the damage done by thousands of rats in the valley.

"Effective rat and stoat control is vital to keep threatened species such as mohua alive and well on the mainland of New Zealand", said Te Anau Biodiversity Ranger Gerard Hill. “The Eglinton Valley is now intensively managed to keep these pest numbers low.”

Mohua are particularly vulnerable to predation from rats and stoats because they tend to nest in holes and cavities in trees, making it difficult to escape if a predator visits the nest. Several rats have been recorded by video cameras eating eggs and adult mohua on the nest during the large pest plague ten years ago.

“The transfer of mohua from Chalky Island will enable the recovery of the species in the valley to happen far quicker than it would have happened otherwise,” Mr Hill said.

Mohua were once widespread across the South Island, but their numbers have dwindled on the mainland due to predation from introduced animals and habitat loss. Secure populations of mohua exist on a number of predator free islands now, allowing reintroductions such as this to take place back to protected mainland sites.