Don’t let your dog be a kiwi killer

The Department of Conservation will today launch an ambitious campaign to help save Northland brown kiwi from dogs.

The Department of Conservation will today launch an ambitious campaign to help save Northland brown kiwi from dogs.

Elsewhere, brown kiwi live to be 45-60 but in Northland, the average age is just 14, because of dogs.

Kiwi populations will die out in parts of the region unless positive action is taken to minimise deaths by dog, says DOC Whangarei area manager, Sue Reed. 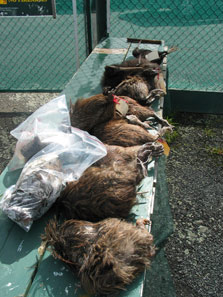 These kiwi were all killed by one dog
during Christmas 2005

“Our new campaign focuses on working with all sectors of communities to both raise awareness of the plight of our kiwi and support action for change. The good news is that people are the answer – everyone here can help save kiwi from dogs.”

Recent local research shows many residents are unaware of where kiwi live, the scale of the dog threat, the ease with which dogs can kill kiwi and the fact that any dog can kill a kiwi.

“Kiwi are extremely attractive to dogs. They smell really good to dogs, they run fast when chased and they can’t fly. Because kiwi don’t have a breastbone, even a playful nudge can kill them. They often live in close proximity to dogs in Northland.”

The campaign will be trialled in the Whangarei district, combining promotion and publicity initiatives with action research, direct community liaison and engagement. There will be extra emphasis on the importance of regulations relating to kiwi, Ms Reed says.

“Where there are signs saying ‘no dogs’ or ‘dogs on a lead’, they’re there for a reason and in this situation, it’s to protect kiwi or other native birds. Obviously accidents happen, but when someone has deliberately decided to ignore a sign they can expect a consequence.”

The dog campaign is a critical component in a suite of actions required to look after kiwi effectively, Ms Reed says.

“A range of actions needs to be taken to help ensure thriving populations of our native bird. Thousands of kiwi once lived all over Northland – it’s possible to have that situation again with the combined effort of agencies, residents and visitors. Kiwi belong to all New Zealanders and saving them is about what everyone does, not just one group or organisation.”

Dog owners are reminded that dogs should be under control at all times. Wandering dogs should be reported immediately, at any time of the day or night, to Environmental Northland on +64 9 438 7513 for the Whangarei and Kaipara districts or the Far North District Council on 0800 920029.