The Department of Conservation (DOC) is investigating a report that a commercial fishing boat appeared to be fishing in the Motu Manawa/Pollen Island Marine Reserve in Auckland’s Waitemata Harbour.

The Department of Conservation (DOC) is investigating a report that a commercial fishing boat appeared to be fishing in the Motu Manawa/Pollen Island Marine Reserve in Auckland’s Waitemata Harbour.

The North Western Motorway passes through the marine reserve which is located between Pt Chevalier and Te Atatu. A motorist has told DOC that he saw a fishing boat that appeared to be laying nets in the marine reserve. 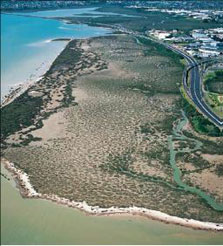 DOC rangers, who responded to a phone call from the motorist, have seized two nets and about 80 fish.

“We’re investigating the incident and if we find an offence has been committed we’ll be prosecuting,” says Phil Brown, the biodiversity manager at DOC’s Auckland Area Office.

Marine reserves exist to protect areas that have distinct features that warrant preserving. They enable the marine life in the reserve to live in their natural state.

The reserve supports an abundance of birdlife. It is a rich feeding ground for white faced herons, pukeko, spotless crake and the endangered banded rail. The wetlands are also important for non-waders, like kingfisher and fernbirds, and for migratory birds such as  godwits, knots and sandpipers that fly to northern Asia to breed.

DOC has had a number of successful prosecutions involving fishing and collecting shellfish in marine reserves in the Auckland area in recent months.

In August last year a man was fined $1000 after pleading guilty to taking kina from Long Bay-Okura Marine Reserve and to giving false personal details to a DOC ranger. He was also ordered to forfeit his fishing gear.

In December two men were fined $500 each and ordered to pay court costs after pleading guilty to “taking” from the Long Bay-Okura Marine Reserve. They were caught by DOC rangers fishing from a boat in the reserve. The pair were fined, even though they hadn’t caught anything, because the offence “taking” from a marine reserve includes attempting to take seafood.

Two Gisborne men were recently sent to prison for taking crayfish, kina and paua from the Te Tapuwae o Rongokaka Marine Reserve north of Gisborne. One was jailed for eight weeks the other for six weeks.

These are the longest sentences handed down for taking from a marine reserve and followed a joint operation by DOC and Ministry of Fisheries.