The Department of Conservation advises that it is actively enforcing freedom camping rules on public conservation land this summer.

The Department of Conservation (DOC) advises that it is actively enforcing freedom camping rules on public conservation land this summer.

This follows the introduction of the Freedom Camping Act 2011. The Wakatipu and Wanaka DOC offices have now placed signs in all vehicle accessible reserves and conservation areas where freedom camping is inappropriate.

Unlike urban areas in the Queenstown Lakes District, where under Council bylaws no freedom camping is permitted, DOC only excludes freedom camping on conservation land within 200 metres of special freedom camping signs. There will be two types of symbols to look for:

Absolutely no freedom camping for anyone within 200m:

Freedom camping is allowed within 200m, but only for self contained vehicles: 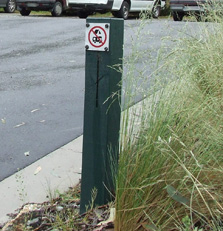 Mr Lind explains, “You could also incur a fine if at anytime you dump rubbish, light campfires, damage plants or inappropriately toilet anywhere within 200m of the signs. The maximum penalties are higher for dumping campervan toilet waste - up to $10,000.

“Our message to freedom campers is simple – camp in the right places for your type of vehicle, camp responsibly, light no fires and use toilets and dump stations.”

DOC has several campgrounds in the Southern Lakes. In the Wakatipu these include Twelve Mile Delta, Moke Lake, Kinloch and Lake Sylvan. In the Wanaka area there are several DOC campgrounds on the highway between Wanaka and Haast. DOC continues to improve its camping areas, such as the redevelopments at Twelve Mile and new toilets at Moke Lake. Camping at DOC campgrounds offers a peaceful natural setting, toilets, clean water and are moderately priced at $6 or $7 a night per adult.

Backcountry trampers are not part of the new rules, which only apply to public conservation land accessible by motor vehicle.

If anyone has doubts about where they can freedom camp, they should check at a local i-site or Department of Conservation visitor centre or visit www.camping.org.nz.

The Freedom Camping Act 2011 assists authorities to address the negative effects of freedom camping – such as dumping rubbish, random toileting and to discourage camping in unsuitable locations.

Freedom camping may be in a tent, caravan or any type of motor vehicle including campervan, car or house-truck.

Freedom camping does not include backcountry tramping, day visitor parking or short stops at night to avoid fatigue.