A Department of Conservation rodent detecting dog has caught and killed a rat that was on a van about to be ferried to Motuihe Island, a pest-free island in the Hauraki Gulf Marine Park. 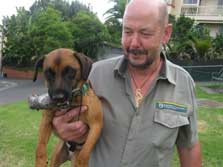 A Department of Conservation (DOC) rodent detecting dog has caught and killed a rat that was on a van about to be ferried to Motuihe Island, a pest free island in the Hauraki Gulf Marine Park.

Pai, a specially trained border terrier cross, and DOC ranger Fin Buchanan detected the rat at midday today (March 17) while carrying out a routine check of cargo being loaded onto the ferry at Half Moon Bay in the Auckland suburb of Howick.

“It’s hard to over state the significance of catching and killing this rat before it got to Motuihe Island,” says Fin Buchanan, the DOC ranger in charge of biosecurity on DOC managed islands in the Hauraki Gulf Marine Park.

“The island has been free of rats and other animal pests that prey on native wildlife, since 1996."

"If this rat had got to Motuihe endangered species including kakariki, bellbirds, saddleback and shore skinks would have been at risk of being wiped out,” says Fin Buchanan.

Fin and Pai and the dead rat

“There was also the risk that if a rat population had developed on Motuihe, rats could have swum to neighbouring pest free islands such as Browns Island and Rakino Island which are also safe havens for endangered wildlife.”

“We’re also on track to declaring Rangitoto and Motutapu pest free this winter and these islands would also have been at risk if this rat had not been caught and killed today.”

Fin Buchanan says it was clear there was a rodent on the van which had boarded the ferry and was due to sail to Motuihe.

“Pai began straining on his lead as soon as he began checking the van. He knew there was a rodent somewhere on the vehicle,” says Fin Buchanan.

“We got the van off the ferry. The rat appeared to be in the engine area. I got into the cab of the van and began banging on the area above the engine. Pai was under the engine.”

“The rat dropped out of the engine and tried to escape but Pai caught and killed it.”

“I must admit I’m very proud of Pai. I feel like the father of an All Black who has just scored a try in a test match,” says Fin Buchanan.