Conservation dogs at work in Bay of Islands schools 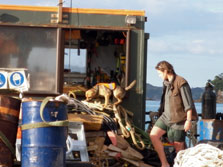 The photo is showing Angela Newport, DOC Bay of Islands conservation dog handler with rodent dog Cody inspecting a barge at Kaimarama Bay, Rawhiti for rats before it travels to Otehei Bay on pest-free Urupukapuka Island.

Bay of Islands DOC staff introduced more than 300 children from Mangamuka, Ohaeawai, Umawera, Kaeo and Okaihau Primary Schools to the dogs who work for conservation.

Okaihau Primary School Principal Tim Couling says, “The children really enjoyed the sessions and learnt a lot about kiwi and how dogs can affect them.”

Heather Taylor, DOC Weeds Ranger, Bay of Islands Area Office, says, “It was a really awesome experience. The combination of rat dog, pig dog and kiwi dog all in one place was a real buzz. Teachers and kids at all the schools gave us all a warm reception and thanked us beyond what we had actually done.” 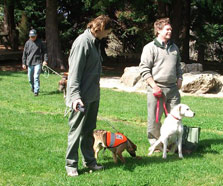 Trev Bullock, a Bay of Islands Area DOC staff member, brought his kiwi aversion trained dog along as part of the dogs in conservation sessions. He says, “I found the school visits enjoyable and I think the kids, the teachers and helpers also did, judging by the questions asked and the interest shown. The dogs were definitely stars on the day.”

Kiwi/bird aversion training held at Puketi Forest Headquarters as part of Conservation Week was also highly successful. Sara Barber-Kusanic (Programme Manager – Biodiversity Threats, Bay of Islands Area Office) says, “Lesley Baigent did an amazing job in getting close to 90 dogs through. A mammoth effort! In addition, a lot of people who hadn’t registered for the training came with their dogs. Unfortunately, we had to turn them away. Hopefully another kiwi/bird aversion training session will be run in the near future.”