Chiefly kiwi is a girl while boys warm new eggs

Manukura, the first white kiwi chick hatched in captivity, is a girl.

Manukura, the first white kiwi chick hatched in captivity, is a girl.

Seen as a sign of new beginnings by local Maori, the rare chick may be just that – because new, out-of-season kiwi eggs have been found in the native forest at her Pukaha Mount Bruce home.

DNA tests conducted by Massey University scientists revealed Manukura’s gender, pronouncing her a girl. The result was contrary to the expectations of rangers caring for her at the National Wildlife Centre.

Since she hatched on 1 May, the star thirteenth chick of Pukaha Mount Bruce’s record kiwi breeding season has commonly been referred to as ‘he’.

“I had a feeling all along that Manukura was a male and we’d come to think of her as a boy,” Department of Conservation captive breeding ranger Darren Page said. “It was yet another surprise from this extraordinary bird.”

Darren Page said the only way to determine the sex of a juvenile kiwi is to remove a feather and extract DNA from the tip of the feather where it enters the skin. 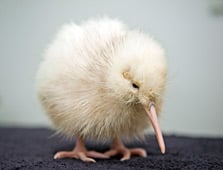 Manakura the white kiwi is a female

Named by local iwi Rangitane o Wairarapa, Manukura means ‘of chiefly status’.  Rangitane spokesperson Jason Kerehi said there had been many chiefly women in Maori history and the name Manukura could be given to a male or a female.

Manukura remains in captivity in a fenced outdoor enclosure which she shares with another female chick named Potiki, meaning ‘youngest’ because she was the fourteenth chick hatched last season.

Manukura will remain in the outdoor enclosure until at least October.  Visitors to the centre can see the special kiwi each Sunday at 2pm after she has been weighed by rangers.  No decision has yet been made on her future.

While the young kiwi eat, sleep and grow in captivity, adult males are doing their job of sitting on four new kiwi eggs discovered by rangers in late June in the 940-hectare native forest.

“This is either exceptionally late in the kiwi breeding season which is from September to May or exceptionally early,” said Pukaha Mount Bruce field centre supervisor Kathy Houkamau.  “While we know the eggs are there, we don’t yet know if they’re fertile because we wait until they are 65 days old before bringing them in.”

The kiwi eggs were discovered through ‘egg timer’ transmitters fitted to male kiwis that tell rangers how many days a male has been sitting on an egg.   “It's much less intrusive than the old way of tracking males and testing eggs to determine their age and there is also less risk of egg abandonment.”

Kiwi eggs are collected at night when the male is off the egg and out feeding.  They are brought into the kiwi nursery where they are incubated and hatched at around 80-90 days. The chicks are raised in captivity until they weigh 1.2 kg when they are released into the wild.

Visitor numbers at the centre have soared since Manukura captured world-wide attention in May. “Mid-winter is usually our quietest time of year but our June and July numbers are almost double what they were at the same time last year,” Kathy Houkamau said. “Manukura has certainly raised awareness of our work here to restore the forest and reintroduce native species.  We need all the support we can get to maintain our intensive pest control programme which is funded mostly by community efforts.” ENDS