'Bird call' by Shayne Burrows of New Plymouth, was voted the best in the Sounds of New Zealand 2011 competition.

The winning song has been found in the competition dubbed New Zealand Idol for native birds. 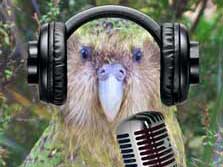 'Bird call' by Shayne Burrows of New Plymouth, was voted the best in the Department of Conservation’s New Zealand Music Month Remix the sounds of New Zealand competition.

“I just wanted to get some of my music out there, even though I am still very much an amateur,” says Shayne, who made the track from bird song on the DOC website, remixed with his own music in the software application GarageBand.

The competition was perfect for Shayne who has always been interested in music and birds – he even uses kokako as his avatar on Twitter and as a logo for his work.

The idea of remixing New Zealand’s native birds to create contemporary new sounds proved popular with New Zealanders here and abroad – with entries coming from as far away as Amsterdam and London.

“New Zealanders have a strong emotional connection to nature. For a lot of people our native birds really are New Zealand idols.

“It wasn’t until I was living overseas that I really began to appreciate what I had here in Aotearoa,” says Elizabeth speaking about the number of overseas entries received.

“I’d love it if through this whole fun process, people go away with a better appreciation of our birds.” she says.

Shayne receives a copy of the Unnatural History of Kakapo DVD and Alison Balances award winning book Kakakpo: Rescued from the brink of extinction.

Listen to the top five

Listen to some of the other entries

The competition to remix New Zealand bird song ran throughout New Zealand Music Month in 2011. Entries came from New Zealanders as far away as Melbourne, Amsterdam and London.

Our judges picked the top five entries which were posted on the Conservation blog and here on the DOC website. The public voted to choose the winner.

Listen to and download recordings of songs and calls of New Zealand birds.